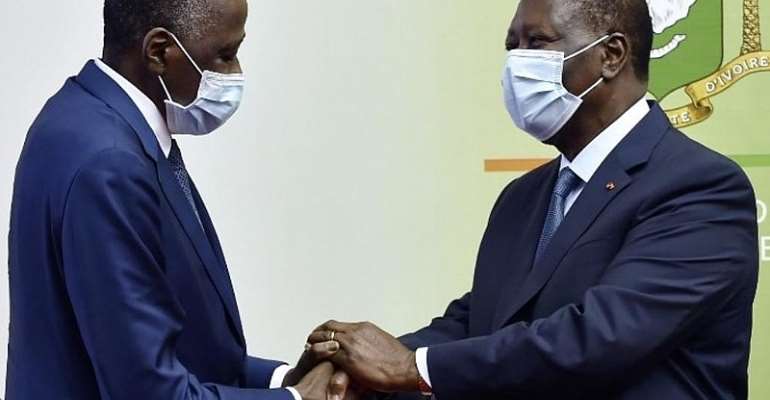 Ivorians were in shock Thursday following the sudden death of Prime Minister Amadou Gon Coulibaly. The premier died just days after returning from treatment in France for a heart condition. His death has cast uncertainty on the presidential election due in October, for which he was the ruling party's candidate.

Ouattara paid tribute to Amadou Gon Coulibaly on Twitter, calling him "my little brother, my son", a man who for 30 years had been his closest of allies.

“He embodied this young generation of Ivorians of great skill and extreme loyalty to the nation,” the president wrote, praising his "zeal for work and self-abnegation".

Ivorians in shock
News of the prime minister's death has shocked Ivorians.

"We knew that he had health problems but we didn't realise it was that bad," Venance Konan, an Ivorian author and journalist told RFI.

Alarm bells were raised when the 61-year-old travelled to France in May to seek medical treatment for a heart condition, despite the Covid-lockdown. His treatment lasted two months.

When he returned last Thursday, Ivorians "thought he was out of danger", continues Konan. "We saw images of him looking well and we were full of joy."

The death of Gon Coulibaly, who belonged to a powerful family from Côte d'Ivoire's north, "has come as a shock to us all", says François Daly, an entrepreneur in the commercial capital Abidjan.

"There is no animosity. Everyone is paying their respects to him and his family, irrespective of what party they're in," he told RFI.

Election uncertainty
Once the mourning passes, the west African nation will have to prepare for one of its most tense elections in a decade against a background of uncertainty over who will now represent the ruling Rally of Houphouetists for Democracy and Peace (RHDP) party on 31 October.

Gon Coulibaly was among the favourites to win the presidential race.

"His death is a political earthquake for the ruling party," comments Venance Konan. "It has reshuffled the decks of the RHDP, other parties and the entire country," the journalist and author said.

The RHDP party admitted in May that it had no plans to find an alternative presidential candidate if the prime minister were unfit.

Could Ouattara decide to contest ?
In March, President Ouattara ruled out running for a third term, paving the way for Gon Coulibaly to take his place. Now that his heir has gone, some observers reckon the president may reconsider ending his decade-long rule, although experts say this may be legally problematic.

"It is not impossible," reckons Konan. "The president said that if (Henri Konan) Bédié decided to compete he would be tempted to do so." That has now happened. The octogenarian former president last month announced his intention to run.

Bédié is not the only figure of Cote d'Ivoire's old guard vying for the presidency. Ex-leader Laurent Gbagbo may also decide to run if the International Criminal Court, which acquitted him of war crimes, lets him.

Gbagbo's refusal to give up power when he lost the 2010 election to Ouattara sparked a civil war in which some 3,000 people died.

Who after Gon Coulibaly?
The French government on Thursday expressed its condolences to President Ouattara and the family of Prime Minister Amadou Gon Coulibaly, saying Côte d'Ivoire had lost the "architect of its economic recovery" and a "loyal friend to France."

Gon Coulibaly's death risks adding more chaos to the October poll, which had already been overshadowed by the coronavirus and delays in registering voters.

"At this current time, we have still not been registered," entrepreneur François Daly told RFI less than four months before the election.

Daly, like many Ivorians, is watching the RHDP's hunt for a new candidate closely.

Possible names include the Defense Minister Hamed Bakayoko, who served as acting premier during the prime minister's medical leave.

"He is the mayor of the largest town in Abidjan and has a lot of networks," says Daly.

The secretary general in the presidency, Patrick Achi, has also been mentioned. A "hard worker", says Daly, but who could suffer from his previous links to Bédié and the fact that he does not come from the north of Côte d'Ivoire, the RHDP's electoral base. "Bakayoko does and this could set him apart," he said.

‘Sputnik-V procurement contract must be re-examined’ – Kwaku...
6 minutes ago

Getting Sputnik-V vaccines from black market using middlemen...
6 minutes ago