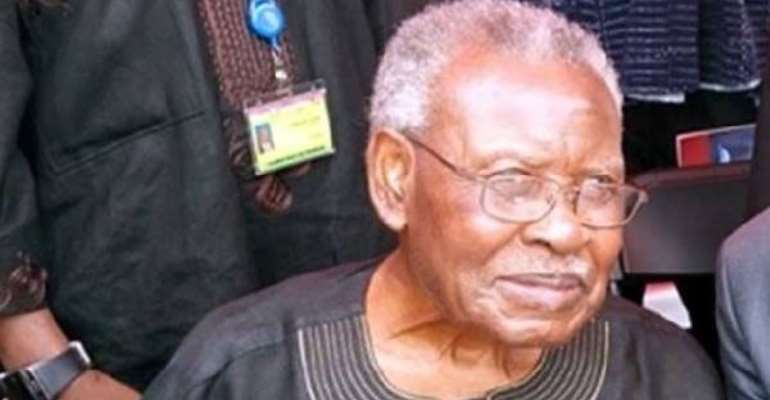 Today is exactly one (1) year since Mr. J. H. Mensah + passed away into eternity after serving relentlessly his country of birth, Ghana politically in diverse Ministries.

DEDICATION: The yearly remembrance anniversary is dedicated to Mr. Joseph Henry Mensah +, known as Mr. J. H +, the brilliant economist, the celebrated politician, the unwavering Ghanaian patriot, the architect behind the famous seven-year development plan of the first President of the Republic of Ghana, Dr. Kwame Nkrumah, the Chairman of the powerful Ghana Democratic Movement, GDM, in Europe which was headquartered in London for his political contributions. He served under the Colonial Administration from 1953 up to 2005 / 2006 as a Senior Minister of Government Business under H. E. John Agyekum Kufour's administration/government of the NPP in Ghana.

Today, on the first anniversary of the death of Mr. J. H. Mensah +, l write vehemently once again in my capacity as a Founding Member and one of the few remaining active serving members of the powerful Ghana Democratic Movement- GDM who are still very active in the NPP in Hamburg, founded by him, who was internationally recognised worldwide as Chairman & Founder with London as it's head office and equally the merchant city of Hamburg as head office in Germany.

Historically, it's on records that the GDM challenged, protested strongly against the PNDC bogus military regime through demonstrations, published articles condemning the junta about the atrocious crimes against humanity, organised seminars and distributed flyers to expose crimes committed against innocent Ghanaian citizens, stripped women naked in public etc. for unlawfully removing a democratic government of Dr. Hilla Limann on 31st December, 1981 in Ghana.

We, the few leading Executives including myself were exiled for twenty years (20) for not visiting Ghana since declared wanted to face treason charges by the PNDC in Ghana for our direct and open protest against the regime. We are proud today as we remember and mourn the loss of a unique statesman, a charismatic man, a father, an uncle and a friend for his many great political achievements. Mr. J. H. Mensah + is one of the greatest celebrated politicians and an international economist, Ghana, has produced in modern political history of our Nation.

I served under the GDM in the position as Assistant General Secretary & National Financial Secretary simultaneously from 1982 - 1992 in Hamburg chapter and Germany until ban on party politics was lifted in Ghana. Obviously, l had so many political interacts with Mr. J. H. Mensah+, personally during the political struggle against the PNDC killer regime outside Ghana in the UK, Hamburg, Dortmund, Kiel and Dusseldorf etc. in Germany on several times. I would like to say emphatically with pride apart from my earlier description about him as a good counsellor and a highly respectable Ghanaian traditionalist.

Mr. J. H. Mensah + was optimistic that one-day Democracy will be restored in Ghana to benefit future generations. Significantly, Mr. Joseph Henry Mensah +, was my political MENTOR in Hamburg, Germany, and in the United Kingdom during the time of the political struggle against the PNDC in the 1980's.

INAUGURATION OF THE GDM

The official Inauguration of the GDM took place on 21. 04. 1984 at Mensa, Dammtor, at the Hamburg University.

EXTRACTS FROM HIS ADDRESS

Mr. J. H. Mensah+, main speaker of the inauguration lamented about the deep cries of Ghanaians on crimes against humanity and bad economic infrastructure, detentions without trial, low level of Ghana's educational system etc. conditions 27 years after independence with the hall filled to capacity. He reiterated that, historically, there has not been any successful military rule over the world. He cited an example that Sir Winston Churchill, who rallied the British to victory during the 2nd world war as a Prime Minister was forced to resign immediately after the end of the war because they didn't want to experience any military dictatorship in Great Britain and received standing ovation from the invited guests and participants, journalists, lawyers as well as human right groups etc. who came to listen to his powerful speech. He concluded finally not for Ghanaians to rely on United States Of America, Great Britain or Germany to fight for our freedom but to get involved in the struggle irrespective of one's political affiliation, religion and tribe through the mass media and with GOD ON OUR SIDE, the fight to restore DEMOCRACY IN GHANA will be successful one day in his life time and will spread over the continent of Africa to end military regime's which was becoming rampant on the continent of Africa.

A GOOD GUESS IS AS GOOD

It was through Mr. J. H. Mensah +, that Hamburg gave birth to both the GDM & NPP in Germany of fame stretching to the Scandinavian countries and other European cities apart from the United Kingdom since there were no branches in these countries.

FOUNDING MEMBERS OF THE

I, Oheneba Oduro-Opuni, Hamburg & Mr. George Kofi Afrifa, Kiel, a political scientist, who later became the General Secretary of the NPP until he suffered a stroke barely fourteen (14) years ago organised the first historical meeting of the NPP in Hamburg at Dr. Martin Luther King Jnr's house, University of Hamburg in June, 1992 with some few Ghanaians when ban on party politics was lifted in Ghana officially. Ghanaians were still scared to openly attend NPP meetings and activities because of the threat on their lives and businesses in Ghana.

Soon after these memorable meetings, Mr. J. H. Mensah+, sent twenty (20) NPP membership cards which was scarce to get in Europe to me to register Ghanaians in Hamburg. Within weeks, ALL the cards were sold out at fifty Deutsche Mark (DM50), per one and more copies were ordered and have records of those register in my archives in Hamburg for reference purposes.

The vacuum created by the death of Mr. J. H. Mensah + will take a very long time or years to be filled in modern day Ghanaian politics generally.

Finally, with deep sadness and painful reflections of memories, l stand up firmly like an ancient and active trained professional Roman soldier and SALUTE MR. J. H. MENSAH +, my political mentor, adviser, lecturer and motivator as l celebrate his yearly anniversary after serving honestly, truly, sincerely, courageously Ghana, the country he loved and care so much and a chapter in history has come to an end at his final journey to eternity.

I extend my sincere condolences to the bereaved family worldwide once again, more especially in Ghana and the great OSONO party members for the loss of such a DOYEN politician. Honestly, Mr. J. H. Mensah +, will be remembered by generations of Ghanaians who believe in Democratic principles and the rule of law especially in the merchant city of Hamburg and generally in Germany for his unflinching support politically for those few fellow citizens who had direct political contact and relationship with him during the 1980's.

SEE THE BELOW CLASSICAL PICTURES AND THE EVENTS DEPICTING MOST OF MR. J. H. MENSAH'S ACTIVITIES IN THE GDM IN THE CITY OF HAMBURG

INAUGURATION OF THE GDM

The official inauguration of the GDM took place on 21. 04. 1984 at Dammtor, Mensa at the University of Hamburg. See the attached classical Talking Drums publication front page with the General Secretary, Mr. George Kofi Afrifa reading the resolution of the demonstration at the hall with a helping hand from Oheneba Oduro-Opuni, his Assistant General Secretary.

GDM members mostly Ghanaians, Germans and some African countries sympathisers demonstrating through the streets of Hamburg from Monckebergstreet to the inauguration hall at Mennsa, Dammtor, University of Hamburg.

Mr. J. H. Mensah +,(main speaker), addressing the audience at the great hall of the University where he delivered his powerful and penetrating speech with Mr. S. E. Osei (Agya Osei) of Hamburg, GDM Director Of Operations assisting him with the microphone.

Line up of GDM Executives at the inaugural hall - R - L

Oheneba Oduro-Opuni, Assistant General Secretary & Financial Secretary of the GDM Launching an Appeal For Funds as part of the programme from the invited guest and participants at the inauguration hall at the University of Hamburg.

Mr. J. H. Mensah +, in a memorable picture with Oheneba Oduro-Opuni on 22. 04. 1984 after the Thanksgiving Service of the successful inauguration of the GDM at Bei der Hopfenkarre, Tonndorf, Hamburg where a private reception was reserved for the buoyant politician and the delegation from London.

A press conference organised by the GDM in Dortmund on the 06. 03. 1987 which coincided with Ghana's 30th Independence Anniversary with Mr. J. H. Mensah+, assiduously addressing the participants. With Oheneba Oduro-Opuni sitting besides him with some active members surrounded together with Mr. Ismael Oppong, an organiser from Nurnberg in a group picture with Mr. J. H. Mensah, and Mr. R. O. Frimpong-Manso, a delegate from London. See the attached publication in the RUHR NACHRICHTEN SAMSTAG 07. 03. 1987 in Dortmund, Germany.

A FOUNDING MEMBERS CERTIFICATE OF THE GDM

A Founding Members Certificate Of the GDM issued to Oheneba Oduro-Opuni based on his unflinching political contributions and services signed by Mr. J. H. Mensah +, the giant politician himself on 01. 06. 1985 in the merchant city of Hamburg in one of the numerous seminars and activities the movement organised with him personally.

1. A POLITICAL BACKGROUND IDENTITY IN THE PFP IN GHANA :

A registered and dues paying membership card of the POPULAR FRONT PARTY - PFP of Oheneba Oduro-Opuni in Ghana in the 1970's confirming his political career background.

An article written by Oheneba Oduro-Opuni and published in the Talking Drums - entitled A DEMOCRATIC STATE NOW condemning the junta about the secret death squad in Ghana in 1984.

The attached classical picture depicting from L-R : Dr. Wolfgang Peters, a young German legal consultant for the GDM, who helped the movement to get registered at the Hamburg Administrative Court, Oheneba Oduro-Opuni, the Assistant General Secretary/Financial Secretary of the GDM and Mr. Dickson Kankam Boadu, National Coordinator in one of the numerous symposiums in September, 1984 at the University of Hamburg.

A classical picture of Mr. J. H. Mensah+ standing addressing the participants namely, GDM Executives in Germany, German business gurus, lawyers, human rights groups and the general public. He enlightened the audience about the current political situation in Ghana at that time and what future NPP government will do to bring investment in Ghana. He equally answered questions participants raised perfectly.

NOTE: The Ghanaian Sphinx, reflections on the Contemporary History Of Ghana, 1972 - 1987, by the late Prof. Albert Adu Boahene, formerly Professor and Head of the Department of History, University of Ghana. Being the J. B. DANQUAH MEMORIAL LECTURES, 1988, Under the Auspices of The Ghana Academy Of Arts & Sciences. The above powerful and historical lectures ever held in Ghana during the culture of silence period under the PNDC was Edited and Published by THE GHANA DEMOCRATIC MOVEMENT (GDM) branches in- ACCRA, LONDON, HAMBURG, NEW YORK AND PARIS under the able chairmanship of the late Mr. J. H. Mensah+.

MAY HIS SOUL REST IN PEACE