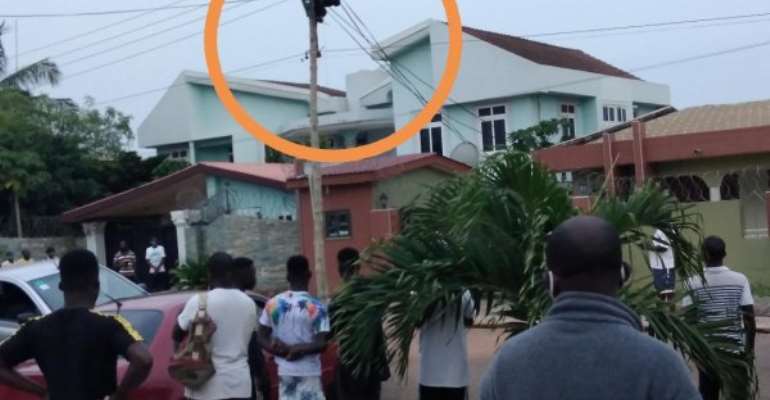 A 22 year old electrician apprentice was electrocuted on a high tension pole in Sakumono, Tema West on Saturday.

The man was identified as Kofi Owusu by some onlookers who thronged the Chapel Square area in the sprawling community.

He wore a blue overall, with no hand gloves on and hanged on for over four hours with a few of his tools lying beneath the pole that bore his corpse.

The onlookers, mostly from Sakumono Village where the deceased lived with his family, wailed uncontrollably as they waited for the Police.

His body was later brought down with the help of police personnel and officials of the Electricity Company of Ghana (ECG) after they cut power to the area.

Some residents who were spotted earlier said he had been invited to fix an electrical fault few hours after the rains subsided Saturday afternoon.

The body latched atop the electric pole with both hands firmly gripping the wires and head propped backwards.

It is however unclear he was a certified electrician and authorized by the ECG to climb such electrical poles.

Corroborating the incident, Chief Inspector Collins Antwi Kweku Amankwah, Station Officer, Sakumono Police Station, said the deceased was an electrician apprentice who inadvertently slipped whiles working on a faulty line and in the process held onto a live wire leading to his death.

The body of the deceased, he added, had been deposited at the Police Hospital morgue.