After 'hell' in Libyan jails, migrants reunite aboard rescue boat 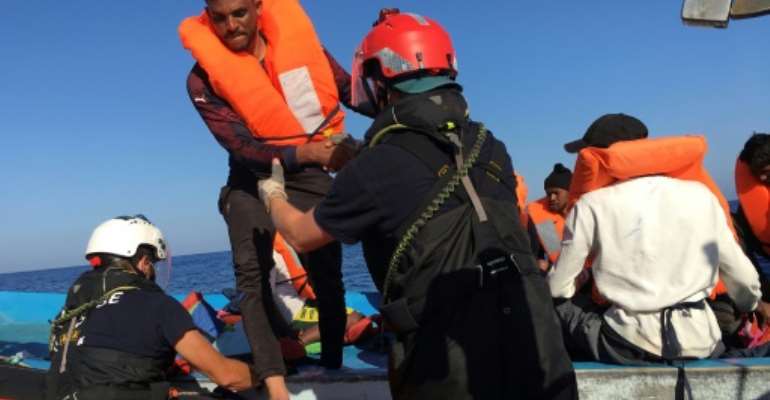 For Taieb, Noman and Hafiz, it was "destiny" that reunited them on a rescue boat in the middle of the Mediterranean after a harrowing stretch in Libyan detention centres.

As the Ocean Viking operated by charity group SOS Mediterranee awaits a port of entry to disembark the 180 migrants fleeing Libya it has saved in the past week, some of those rescued are rediscovering friends they imagined were long-lost during the arduous voyage in search of a better life in Europe.

"These faces that you see inside, you'll never forget them," said Arslan Ahmid, a 24-year-old Pakistani, speaking of the men who, like himself, were held in detention centres in Libya that human rights groups have condemned as inhumane.

Ahmid and his friends spoke to an AFP reporter aboard the European charity ship.

Whether cramped aboard the small wooden boats used to escape from Libya, or during the first chaotic post-rescue hours on the Ocean Viking, migrants have had little opportunity -- or energy -- to take much note of their fellow passengers.

But now, as the Norwegian-flagged vessel lingers in open waters waiting for either Italy or Malta to assign it a port of disembarkation, one group of migrants has finally reunited, using the few words of common language they share.

None know exactly the location of the detention centre where they were held on the Libyan coast, but all remember vividly their encounters: four or five months ago, the men crossed paths once a day in the small courtyard where they would eat a meagre meal.

Despite the dangers of the wood boats used to flee Libya, there is no shortage of migrants willing to try. By Shahzad ABDUL (AFP)

"We'd say hello, nod our heads," said Ahmid, who explained that because of his lack of English, he could not communicate well with an Eritrean friend.

"At the time, it was hard, we'd quickly lower our eyes. But when I saw him again, I told myself, 'It's destiny!' said Ahmid, who said he was held by Libyan authorities because he was undocumented.

Hafiz, 30 years old, in a blue T-shirt, black sweatpants and bare feet, is the Eritrean friend of Ahmid, who said he spent three years behind bars in Libya.

"Now I see him smiling and I'm happy. Before, him and I, we never used to smile, in prison," said Hafiz, who said he was the last of the little group of unlikely friends to leave the detention centre.

The United Nations High Commissioner for Refugees has estimated that about 4,500 people are detained in Libya, with the condition of refugees and migrants "of grave concern".

The Ocean Viking has rescued 180 migrants in the past week. By Shahzad ABDUL (AFP)

Noman, another Pakistani on board the Ocean Viking, recounted how the difficult conditions in the Libyan facility quickly fostered friendships.

"The cold, the heat, hunger, thirst. We went through everything together," said the 30-year-old.

"When we saw each other, we'd say we're going to die of hunger or thirst," said Noman, who said he was jailed for half of his 8 months in Libya after the Libyan coastguard intercepted his boat on his first attempt crossing the Mediterranean.

"They brought us seawater to drink. Our guts were torn apart," he said, biting into a cracker while acknowledging "it was weird" to now find himself aboard the Ocean Viking.

Pakistani Taieb, 29, said it "felt good" to finally be around familiar faces, even though the future remains uncertain.

"We're meeting up here. It's incredible. Maybe we'll see each other again later, somewhere in Europe," he said.

His friend Hafiz hopes so.

"We went through hell together, now it's a second life that starts for us and it can only be a better life," he said.

"If I see this guy anywhere in Europe, in Italy or somewhere else," he said, pointing at his friend, "We're going out, party, celebrate life".

Hafiz's words are incomprehensible to his Pakistani friend, but the two men laugh, put their arms around each others' shoulders, and give a thumbs-up.