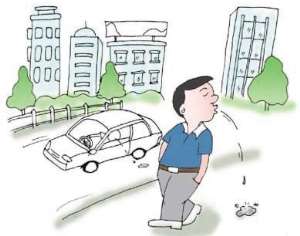 “All bad habits start slowly and gradually and before you know; you have the habit and the habit has you.” Zig Ziglar.

My journey from Teshie to Accra early dawn has kept me experiencing negative attitudes from hawkers, drivers and passengers alike as well as private commuters.

Around such rush time, I observed some watery particles on my screen while driving and also the feeling of drizzles but exposing my arms, I realized it wasn't drizzles but consistent spitting from a passenger car ahead of me by some of its passengers. I was gripped by fear taking into consideration the pandemic we face as a people and how bad the situation has become with a daily high numbers of fatalities and spread.

This experience tortured me psychologically until 14 days when I became much calmer and very careful on the road realizing that Covid-19 is not far from no one.

I have since held the belief that the pandemic is spreading in Ghana through the means we have not spoken about or addressed as a people and compelled to bring it on board for brainstorming.

People are engaged in such practice for various reasons, some of which could be related to medical conditions such as ill-health and others, including having congestions on the chest throat and nose to rid off excess saliva in the throat. Also, sometimes smokers need to get loose material or just bad flavourings out of their mouths, while others are more comfortable spitting than swallowing their saliva and also could be just a bad habit formed over time and has become consistent.

Though it is a worldwide practice which is mostly frowned upon by all manner of people across the globe, especially Westerners who treat it as a criminal act, it is mostly a very dominant act in Ghana often pronounced in the morning, with people visibly seen chewing sticks and trying to clean up their mouth to avoid rotten cavities and odour alongside other unpleasant problems that come with bad breath.

The art of spitting is mostly prominent in the crowded areas, popularly called Zongos, with improper accommodation problems with people sometimes referred to as squatters, compound houses and settlements without facilities such as in-built sinks and washing basins for brushing.

This has led to the popular scenery of seeing men, women and children alike standing by open gutters in their neighbourhood to brush. Some of these scenes can be very disgusting depending on the individual and his/her style of brushing.

Aside from brushing, others will like to chew traditional teeth-cleaning materials such as chewing sticks or 'taakotsa' and others which they do alongside selling, cooking, walking on the street et al, in the name of keeping good oral hygiene.

In Africa and Ghana to be precise, spitting is used to communicate dissatisfaction, disgust, rage, anger and sometimes to refute curses or disastrous happenings thus if someone should spit at you, it communicates his or her utter disrespect towards you or your actions. On the football pitch, spitting on the ground is a common sight but spitting at your opponents is categorized as 'violent behaviour' by world by FIFA which describes it as a sending-off offence.

HEALTH IMPLICATIONS
According to experts, spitting in public is not just gross but a health hazard, especially in this time of Covid-19 pandemic when public health management has become very hard to deal with and also taking into consideration the droplets spread nature of Covid-19.

One stands a chance of catching a cold or possibly a flu as well as TB, hepatitis, viral meningitis, cytomegalovirus ‒ a common virus similar to the herpes virus ‒ and the Epstein-Barr virus, which is a common herpes virus that causes many diseases such as glandular fever and other serious conditions.

The COVID-19 disease, caused by SARS-CoV-2 virus transmits from one person to another through saliva or spits. Spitting in public isn't just a bad habit anymore, it is hazardous to public health, the health experts stated.

“Spitting in public place could intensify the spread of the virus. Many people, especially those who smoke or chew tobacco, betel leaves (paan) or gums have the urge of spitting anywhere and everywhere,” Dr. Rabindra Pandey, a public health expert, said.

“By now, it has been established that SARS-CoV-2 transfers through respiratory droplets. When a person randomly spits on the road or any other public place, the chances of the droplets entering eyes, nose or mouth of other people nearby are high,” Dr. Pandey added.

He added that if a person spat in an enclosed room which doesn't have proper ventilation, the threat of virus transmission would increase even more.

“A lot of people around us have the habit of spitting frequently which is dangerous amid the pandemic. Thus, people should maintain cleanliness and hygiene and their surroundings to limit the transmission of diseases, be it Covid-19 or any other communicable disease that transmits through saliva,” he said.

It has been identified across the world that most of the pandemic the world ever face has almost a 90% connection to unhygienic practices which include spitting and other irresponsible human behaviors.

Safety Practices
Health experts advise that if you are in the unfortunate situation that you are spat at, you should immediately wash the saliva off with soap and lots of water, saliva goes into your eyes, nose or mouth, wash it out with lots of cold water and if you think you’re at risk of infection, get immediate medical advice to be safe and avoid getting contaminated.

Also, the use of tissue papers when having the urge to spit is advised but must be properly disposed of to avoid further contamination; hence the need for drivers, passengers and vehicle owners to have tissues to help deal with such bad public health menace.

Conclusion
It will be prudent for government to look at public spitting as a menace that must be dealt with and eradicated if indeed it would like to have it easy in the fight against public health crisis now and in the near future to reduce fatalities and ensure the safety of its citizenry.

We must—as a country—look at best practices across the world and find a suitable way out to save lives and also encourage good hygienic practices geared towards a healthy and productive population for national development.

Having the need to spit time and again is an old habit of many of us. But the situation is very risky now. A minor negligence of one person might be hazardous to public health and we must consider changing our habits to minimize virus infection.

The writer is a staff of the Information Services Department (ISD)

More from Opinion
ModernGhana Links
Keys to understand the Decision of Spain why? And who is behind?
Why The West Is Morally Bound To Offer Reparations For Slavery
In Sudan, a gradual return of the Islamist regime
TOP STORIES