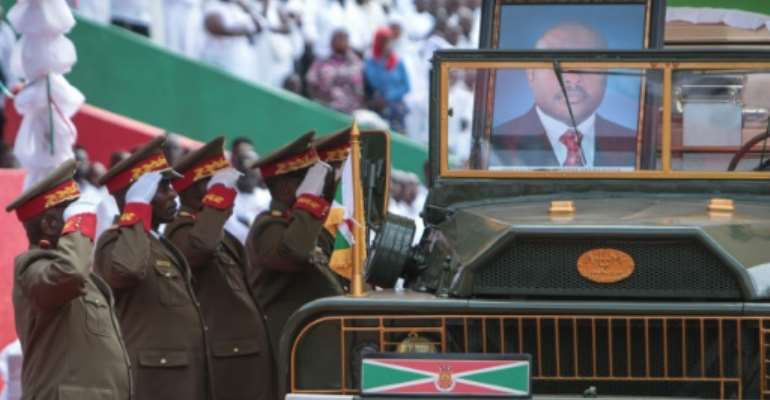 Friday was declared a national holiday and citizens lined the roads waiting for the funeral convoy to pass. By TCHANDROU NITANGA (AFP)

Thousands of Burundians clad in white gathered Friday in the capital Gitega to say a final goodbye to former president Pierre Nkurunziza at a state funeral after his sudden death earlier this month.

The coffin carrying the late president arrived at a stadium in the city, covered in the green, red and white national flag and borne atop a military jeep, as soldiers marched in step alongside it.

The funeral convoy was welcomed by a military band after a 60-kilometre (37-mile) journey from the city of Karusi where Nkurunziza, 55, died on June 8 of what the government said was heart failure.

However speculation is rife he may have caught the coronavirus, as his wife had been flown to Nairobi for treatment for the virus just two weeks prior.

The ceremonies began early in the morning with a "homage by his wife, Denise Bucumi Nkurunziza, his children and those close to him" in an intimate gathering at the hospital where he passed away, a government source told AFP.

Nkurunziza's handpicked successor Evariste Ndayishimiye, who was sworn in last week, presided over the funeral. By TCHANDROU NITANGA (AFP)

Nkurunziza died shortly after an election won by his handpicked successor Evariste Ndayishimiye, who was sworn in last week and who presided over the funeral.

"Nowhere in Africa, or the world, has a leader been as close to God as president Nkurunziza was," Ndayishimiye said in a tear-filled speech, adding he was also "the closest to the people".

"We have lost a father, a friend, a saviour and a head of state," he said.

Nkurunziza's wife Denise, who has recovered from the virus, said that God had given her the strength to accept what had happened.

"In the Bible it is written that we must accept God in everything. There was nothing else to do and I did it," she said.

How Burundi compares to its neighbours on key socio-economic indicators. By (AFP)

Nkurunziza, a devout evangelical who believed he was chosen by God to lead Burundi, leaves behind a deeply isolated country in political and economic turmoil.

No masks, no distance

Friday was declared a national holiday for the funeral, and citizens, including school children in uniform, lined the roads waiting for the funeral convoy to pass.

Inside the stadium the arrival of Nkurunziza's remains led to screams, tears and moans from the crowd, who were asked to stand in silence and bow.

The majority were not wearing masks or respecting social distancing guidelines.

Burundi has taken few measures to combat the spread of the coronavirus, with Nkurunziza claiming God had spared the country from its ravages.

During his swearing-in ceremony, Ndayishimiye admitted the dangers posed by the virus, and urged Burundians to take care and go to a doctor if they felt ill.

Since announcing its first case in mid-March, Burundi has only officially recorded 144 cases and one death.

A medical source told AFP that Nkurunziza had suffered "respiratory distress" before dying.

One diplomat attending the funeral told AFP he had arrived with a mask but removed it after feeling "ridiculous" as no one else was wearing one.

No foreign presidents attended the funeral. Former Tanzanian president Jakaya Kikwete was present as well as representatives from some neighbouring countries.

Nkurunziza will be buried at a monument recently built in Gitega at the site of another structure which was to be dedicated to victims of the country's various crises over the years, but was never inaugurated due to disagreements between the opposition and ruling party.