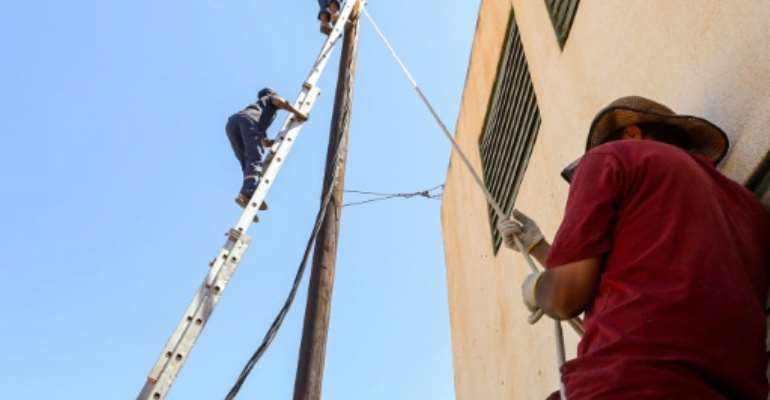 The head of maintenance at the national electricity company said his teams were working 'night and day'. By Mahmud TURKIA (AFP)

Calm might have returned to Tripoli after recent fighting, but electricity shortages still plague the Libyan capital, where generators chug incessantly and power cuts make for another long summer.

Using a cane, Abulkassem al-Kikli walks slowly towards technicians who are working in his neighbourhood of Mashrou al-Hadba, which was heavily damaged in fighting.

He calls them "soldiers" -- labouring tirelessly for long hours to restore power to hundreds of homes.

The authorities have gradually been allowing displaced families to return to their dwellings in the south of the capital once de-mining operations have been completed.

But Kikli says going back without electricity -- needed for water pumps and air conditioners -- is out of the question, in a city where summer temperatures can reach 50 degrees Celsius (over 120 degrees Fahrenheit).

"Electricity is life," the elderly man says, offering chilled water and juice to the workers.

Libya has been mired in chaos since the 2011 overthrow of dictator Moamer Kadhafi, with chronic electricity shortages just one of the myriad problems facing the oil-rich North African nation torn by violence that has drawn in tribal militias, jihadists and mercenaries.

The UN-recognised Government of National Accord announced this month that it was back in full control of Tripoli and its suburbs, after forces loyal to eastern strongman Khalifa Haftar launched an attempt to seize the capital in April 2019.

Gecol also has to repair damage caused by looters who have plundered electricity cables for copper to be sold on the black market. By Mahmud TURKIA (AFP)

The 14 months of fighting left hundreds dead and forced some 200,000 to flee their homes -- and the destruction of infrastructure in the capital's south, which saw most of the fighting, has worsened the electricity problem.

Conscious of the many residents eagerly waiting to return, Khaled al-Mashay, head of maintenance at national electricity company Gecol, said his teams were working "night and day".

But faced with the "scale of the damage caused by the war, we lack skilled workers and equipment", he told AFP.

The company also has to repair damage caused by looters who have plundered electricity cables for copper to be sold on the black market.

"Libyans must be patient, the task is great," Mashay said.

Rationing can mean power cuts of more than 12 hours a day. By Mahmud TURKIA (AFP)

"The inability to power most of Libya's cities, particularly when the hot weather peaks, is not new," he said from Gecol's headquarters.

What is new since the start of the Tripoli offensive, however, has been the struggle to meet the needs of the capital and its some two million people due to "damage to power stations".

As temperatures rise and national demand passes 7,000 megawatts, the electricity company is only able to supply 5,000 megawatts.

Rationing can mean power cuts of more than 12 hours a day, causing serious disruptions to internet and mobile telephone networks, the supply of water due to pumping interruptions, as well as to fuel at petrol stations.

The violence and volatility have also driven foreign firms out of the country and delayed the construction of four new power stations, with a total capacity of more than 5,000 megawatts.

"The deficit is huge," Tekouri lamented.

"We need to provide a climate of security to encourage foreign companies to return to finish these strategic projects."