Egypt bodybuilders feel pain but no gain in virus lockdown 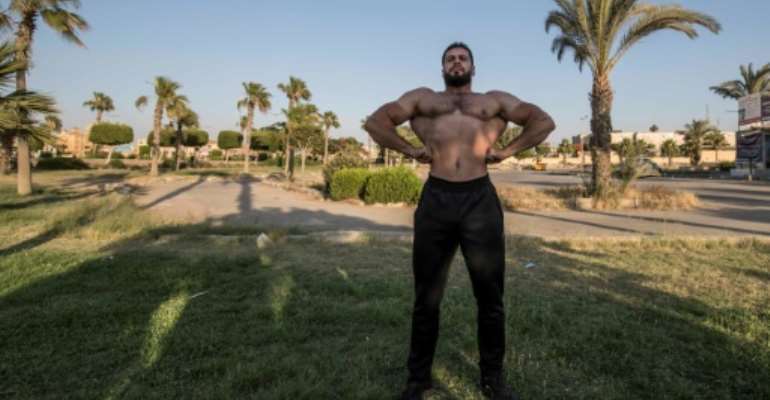 Egyptian bodybuilders say they are raring to get back to their gruelling gyms routines after being on virus lockdown for weeks. By Khaled DESOUKI (AFP)

Egypt's musclemen are frustrated with working out from home due to coronavirus restrictions and are raring to get back to gruelling routines at their gyms, where they also earn a living.

With massive biceps and a gleaming six-pack, Mohamed Ali -- who goes by his nickname Asab, a reference in Arabic to his bulging veins -- is normally an enthusiastic exhibitionist.

The 33-year-old is a personal trainer and veteran participant of several bodybuilding championships with Egypt's national team, which has a history of garnering gold medals on the world stage.

But when AFP visited his sunny home in an upscale gated community in eastern Cairo, Asab chuckled modestly that he was not in top shape.

"I've taken it upon myself... to use the lockdown to start competing again at the end of the year, since I have a lot of time on my hands these days," he told AFP.

Egypt has been under a night-time curfew for the past three months to stem the spread of the novel coronavirus, but the number of infections continues to rise.

The North African country, with a population of over 100 million, has officially recorded over 58,000 COVID-19 cases and 2,365 deaths.

Gyms have been shuttered as part of nationwide restrictions, but that has not deterred Asab from hitting his home gym hard.

He is re-sculpting a taut physique through an extremely demanding workout, in the hope of competing in Mr. Olympia -- the world's premier bodybuilding competition, tentatively scheduled for December in Las Vegas.

But more than his competitive aspirations, Asab is worried about his business and his livelihood.

The owner of 16 gyms in Cairo said he was paying several hundred staff out of his own pocket.

More than his competitive aspirations, Asab is worried about his livelihood. By Khaled DESOUKI (AFP)

Normally buzzing weight machines have stood idle for three months as the lockdown shuttered his facilities and cut off his only source of income.

Earlier this month, the government said gyms would partially re-open, without giving a clear indication of when.

"We're like other industries such as tourism and restaurants that have been affected 100 percent," Asab said.

"I have a whole team who depend on commissions from memberships... I really don't know if we'll be able to go on living like before or not," he said, surrounded by dumb-bells on his living-room floor.

Mohamed Nassim, a 33-year-old Syrian who fled his country after war broke out in 2011, was also somewhat shy about showing off his muscles.

He said that when competing, he trims his body fat down to a lean three percent.

"I started getting into bodybuilding in Syria back around 2003, and it was only to bulk up initially because I was really skinny," he said.

"The first championship I competed in was around 2010, and I actually won in 2011, taking first place in a national competition -- but after the events we headed to Egypt," Nassim added, referring to start of Syria's civil war.

His Facebook account boasts an impressive gallery of images of him oiled up and flexing in regional competitions.

"I had plans to go up on stage again, but all that stopped with the coronavirus," he told AFP in a Cairo park.

Nassim said he had been trying to stay in shape "using dumb-bells at home and maintaining the physical form I had built up over many years."

Several champion Egyptian bodybuilders such as Big Ramy -- lauded by Arnold Schwarzenegger -- have turned into social media celebrities, heading overseas to compete professionally or even dabble in acting.

'The shutdown has really affected us financially and psychologically,' Nassim said. By Khaled DESOUKI (AFP)

But Nassim has developed more modest, short-term goals since his bodybuilding career has taken a hit.

He is keen to return to being a hands-on personal trainer at his local franchise of World Gym, the American fitness behemoth, where he used to coach budding bodybuilders and those looking to stay in shape.

"The shutdown has really affected us financially and psychologically," he said.

"I really don't see any reason for gyms to be closed because it (working out) is actually good for people's immunity as long as they take all the necessary precautions."

His friend, Mostafa al-Rouby, also a Cairo gym owner and bodybuilder, shared similar frustration, as other businesses such as malls open up.

"The coronavirus has completely wiped out the field of bodybuilding," the 27-year-old told AFP.

He said he was still having to pay rent as he waited for the green light from the authorities to reopen his gym.

"If we really want to control this disease then we should open up the fitness world so people can get healthy," Rouby said.