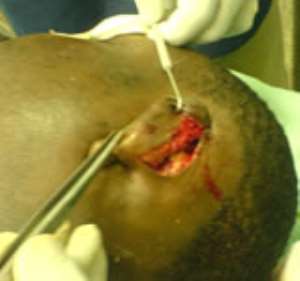 An Accra-based businessman will petition the Inspector General of Police to institute a service enquiry into the conduct of a police constable.

The businessman, Bessa Bruce Doe, alleges that the constable, Bernard Oduro, assaulted him and in the process, chewed off a greater part of his left ear. The lawyer for the complainant, Kwame Akuffo, told JOY NEWS that a complaint has already been filed at the police station and investigations are already underway.

But he says the case should be brought to the attention of the IGP as well.

Police sources have told JOY NEWS that the police officer at the centre of the controversy has filed a complaint against Mr. Bruce Doe, claiming that he was assaulted by the businessman during an operation to arrest drug dealers.

“The rules and the tactics of the services require you where the service man or someone who works in the security service misconducts himself for you to turn to the head of that institution. That is why I'm going to the IGP”.

“Secondly, so that necessary measures will be taken against this man when investigations have been conducted”.

But Mr. Bruce-Doe's lawyer has dismissed this saying the constable is only trying to cover up his offensive conduct.