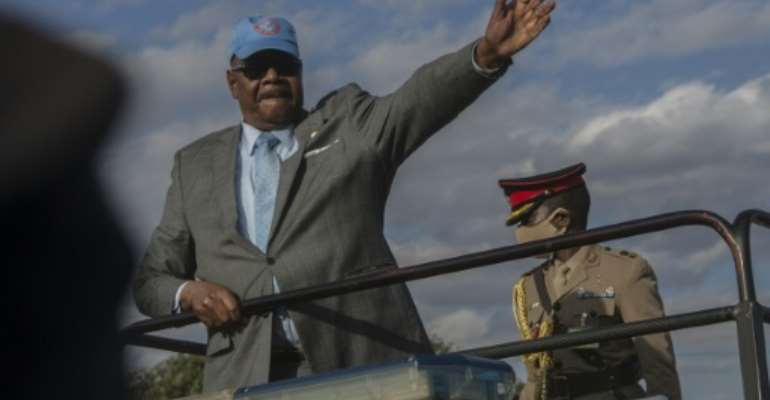 Peter Mutharika, left, came to power on a promise to tackle corruption. By AMOS GUMULIRA (AFP/File)

Here are profiles of the two leading contenders:

President Peter Mutharika, 79, won his first mandate in the 2014 election, two years after his elder brother Bingu wa Mutharika died after having a heart attack while in office.

Last year he was elected for a second five-year term but the result was annulled by a top court, which found the vote flawed by irregularities, including use of correction fluid on tally sheets.

The court said he would stay in office until fresh elections it ordered were held.

He spent much of the last few months fighting to keep his job, labelling the court decision a "judicial coup d'etat".

Last month the Supreme Court threw out his appeal against the Constitutional Court landmark ruling.

Mutharika responded by accusing judges of working with the opposition to steal the election.

He came to power on a promise to tackle corruption after the "Cashgate" scandal erupted in 2013, revealing massive looting from state coffers by government officials, ruling-party figures and businessmen.

But his first term was tainted by graft allegations, and dominated by food shortages, power outages and ballooning external debt, which have damaged his popularity, as well as concerns about his health.

In 2018, a public outcry ignited over $200,000 (178,000 euros) that he had allegedly received from a businessman who was under investigation for a multi-million-dollar deal to supply food to the police.

As leader of the Democratic Progressive Party (DPP), Mutharika has had a mixed economic record since 2014. Growth has slowed from 5.7 percent to four percent but inflation has fallen sharply from 23 percent to 9.3 percent at the end of 2019, according to IMF figures.

His attempts to impose lockdown to limit the spread of coronavirus in April were torpedoed by a court which said he had failed to announce any measures to cushion the vulnerable in the impoverished country.

"If you give me another five-year term, this country will develop to the level of South Africa or Singapore, London, America or Canada," he promised at a campaign rally in Lilongwe last week.

A former law professor at Washington University, Mutharika is a constitutional expert who served as a minister of justice, for education, science and technology, and as minister of foreign affairs. 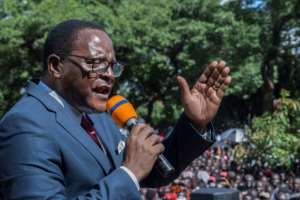 Lazarus Chakwera has made great efforts to re-energise the Malawi Congress Party's base. By AMOS GUMULIRA (AFP/File)

Chakwera led the party into the 2014 elections, coming second to Mutharika at the polls, and he is now confident of victory.

The MCP has lost all five presidential elections since 1994 but Chakwera has made great efforts to re-energise its base.

"The people want change. They're demanding change and they see us as the face of change," he told AFP last week.

Following last year's highly disputed vote, which he narrowly lost, Chakwera teamed up with the country's vice president Saulos Chilima to legally challenge the outcome, and they successfully secured a re-run.

"This time around we have more confidence that this election will be treated with the integrity it deserves," he said.

For the re-polling, Chakwera has obtained the high-profile support of Chilima, former president Joyce Banda and several other small political parties.

Prior to becoming leader of the MCP party, Chakwera was president of the Malawi Assemblies of God from 1989 to 2013.

He was born in Lilongwe to a subsistence farmer whose two elder sons died in infancy. He was named Lazarus after the biblical character who was raised from the dead.

Chakwera, who speaks with a deep American accent, said he loves reading and music -- traditional, Western, country and gospel.

"I love to sing even when I am by myself, in the shower," he said.

He holds degrees in philosophy and theology.