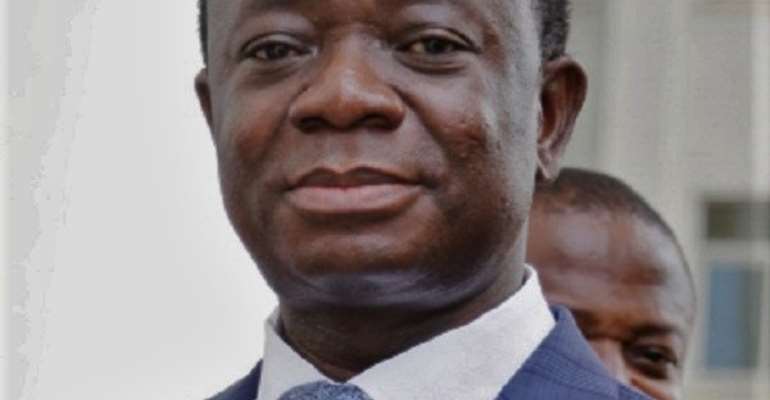 An Accra High Court hearing the trial of Dr Stephen Opuni, former CEO of COCOBOD and two other on Thursday dismissed a motion to stay proceedings pending an interlocutory appeal at the Court of Appeal.

The Court presided over by Justice Clemence Honyenugah, a Supreme Court Justice sitting as an additional High Court Judge said upon a perusal of the documents filed “the applicant needed to file a petition to the Chief Justice, instead of filing motion to the court.”

The Judge said the applicant through his lawyer has not addressed the issues properly.

He said there must also be some exceptional circumstances for which the proceedings should be stayed, which were unavailable in Counsel's submission.

He said the applicant has not demonstrated any exceptional circumstances to warrant the grant of stay of proceedings in his favour.

“I fail to see any special circumstances to warrant the granting of the application,” he said.

On March 16, 2020, the Court dismissed a motion seeking the trial judge, Justice Clemence Honyenugah to recuse himself from continuing with the matter.

The judge said in his ruling then, that the allegations raised on his comments were non-judicial and do not touch on the instant case.

The motion seeks the trial judge, who was a Court of Appeal Judge at the time, sitting with additional responsibility as a High Court Judge, to stop the trial and refer the matter to the Chief Justice for reassignment.

Mr Samuel Cudjoe, Counsel for Dr Opuni, moving the motion earlier said in the case the exceptional grounds for stay of execution was premised on the fact that the judge should not be allowed to sit on the matter.

He said it was their position that this constitutes exceptional circumstances, which should result in a stay of proceedings.

“This is because what constitutes an exceptional case will be determined on case by case,” he said.

Mr Cudjoe, refer to the affidavit in opposition filed by the Attorney General, saying they did not address the issues in their opposition, which concerns the Judge determining the issues of whether the motion of the judge's recusal should be heard by himself.

He said they also mentioned in paragraph 18, of their opposition that the grant of the application would cause unnecessary delay and cause injustice particular when applicant was not the only accused.

He said with that the second and third accused in an affidavit dated March 22, 2020 actually supported the motion, saying in the interest of justice, the court should grant the stay of proceedings.

The Counsel said the applicant agrees that justice delay was justice denied but it was truism that when the right of the individual was at stake in a criminal trial, which could result in the ultimate punishment, they had to have the liberty to defend themselves.

Mr Cudjoe raised the issue of Mrs Stella Ohene-Appiah, a Principal State Attorney, (PSA) who swore to the affidavit in opposition as a witness and still wants to be the Counsel in the trial.

She said what the PSA has done was against rule 7(2) of the legal profession and etiquette rule LI 1969, which indicates that a lawyer shall not appear as witness for his own client except as to merely formal matters such as the attestation or custody of an instrument, or the like, or when it is essential to the ends of justice.

He said if the lawyer is a necessary witness with respect to other matters, the conducting of the case should be entrusted to another lawyer.

The Principal State Attorney said the issue had already come before the court, which was dismissed without any appeal being filed.

She said Counsel for the accused knew what to do when he was dissatisfied with the ruling, adding that it was unfair and that he was just abusing the rules of court.

The Judge indicated that hearing from the parties, it was his opinion that the PSA her affidavits paragraph two said she was acting on behalf of the Attorney General as part of her duty, the facts of which have come to her knowledge in the course of her work in the trial.

The court said going through the affidavit, the PSA was acting upon instructions and it was a fact that she was conducting the trial on behalf of the State.

Mrs Ohene-Appiah in responding to the motion said the State was opposed to the grant of application for stay of proceedings.

She said they rely on affidavit in opposition filed, indicating that the applicant has not been able to show to the court any exceptional circumstances, for which, the court must stay proceedings.

She said as has been said before the court, the mere fact that a ruling been in conflict with the decision of the Supreme Court was not an indication that the applicant's constitutional rights would be breached.

The Principal State Attorney said the trial was not a political one, as the applicant seems to showcase but rather a trial, whose charges were founded on the laws of Ghana.

Mrs Ohene-Appiah said it was, therefore, not proper to merely alleged before the court of law to say the applicant was facing political trial.

“Counsel needed to have shown to the court that the trial was really a political trial,” she added.

She said the applicant had his day in court, where he conducted cross-examinations and had the opportunity to appeal rulings, when he was not in agreement with the court and it would be improper for the applicant to suggest at this time that his Constitutional rights have been infringed upon

She said it was their submission that the applicant has woefully failed to demonstrate any exceptional circumstances to the court for grant of stay of proceedings.

They have both pleaded not guilty to the charges and are on a GH¢300,000.00 self-recognisance bail each.

The trial was adjourned to June 26, 2020 for further cross-examination of the third Prosecution Witness.