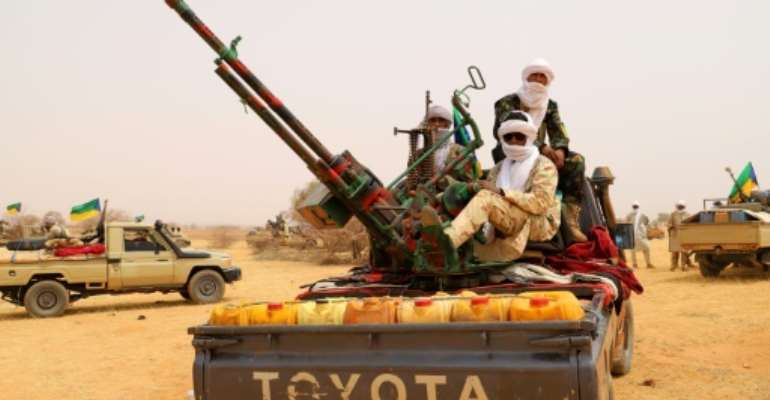 Mali has been in the grips of a jihadist insurgency since 2012. By Souleymane Ag Anara (AFP/File)

Twenty-six people were killed and a village burnt in central Mali, officials said Saturday, but it was unclear who was behind the latest violence in the West African nation.

Two other local officials confirmed the raid and the death toll to AFP, adding that the village was torched and its chief killed.

The attack comes at a time of mounting insecurity in Mali, rising popular discontent with the government, and increasing reports of abuses committed by the country's armed forces.

As is common with many attacks in conflict-riven and remote Sahel regions, it was not immediately clear who the perpetrators were. No group has yet claimed responsibility.

Tabital Pulaaku, however, accused Malian soldiers of being responsible but AFP was unable to independently confirm this claim.

A military official contacted by AFP declined to comment.

Mali, a poor nation of some 19 million people, has been in the grips of a jihadist insurgency since 2012, when Islamist fighters commandeered an initially separatist rebellion by ethnic Tuaregs in the north.

The conflict -- which has killed thousands of soldiers and civilians to date -- has since spread to central Mali, as well as to neighbouring Burkina Faso and Niger.

The ethnic mosaic of central Mali has become a flashpoint. Jihadists regularly attack military targets in the region, where fighting which has inflamed ethnic tensions.

The pastoralist Fulani people are often accused of being close to jihadists, a perception which has led to tit-for-tit massacres between them and other ethnic groups.

A local government official in Koro, a subdivision of the Mopti region, told AFP that the attack on Binedama occurred on Friday afternoon.

Two women and a nine-year-old girl, were among those killed, he said, speaking on condition of anonymity.

An elected official from the area where the attack took place, who also declined to be named, said that "men dressed in Malian army fatigues" had carried out the raid.

He added that they had burned down buildings and killed the village chief.

Without citing the source of his information, Tabital Pulaaku's Aly Barry said that soldiers had entered Binedama village in pick-up trucks before shooting and stabbing 26 people.

The organisation has complained about indiscriminate killings of civilians by local troops before, but says that it is usually ignored.

Reports of abuses by underpaid and undertrained Sahel-state armies have increased in the past few months.

In April, the UN's peacekeeping mission in Mali said it had documented 101 extrajudicial killings committed by the army between January and March alone.

Such allegations are also increasingly weighing on the United Nations -- whose Mali peacekeeping force is 13,00 strong -- as well as former colonial power France, which has 5,100 troops stationed across the Sahel.

France said this week that its forces had killed the leader of al-Qaeda in the Islamic Maghreb, Abdelmalek Droukdel, in Mali.

But elsewhere, military successes against jihadists have been limited and insecurity is spiralling.

In a first for Mali, a prominent opposition figure and former prime minister, Soumaila Cisse, was kidnapped in the centre of the country on March 25.

According to security sources, he is likely in the hands of jihadists.

Central Mali has also been riven by inter-ethnic violence for years.

In February, 31 Fulani civilians were butchered in the village of Ogossagou, for example.

And in April, 12 people were also killed in an attack on several villages near the town of Bandiagara in central Mali, in an attack which was blamed on Fulani gunmen.

Frustrations over insecurity, and other problems such as economic decline among other things, have also spilled over in protests.

On Friday, tens of thousands of people took to the streets of the capital Bamako to demand that President Ibrahim Boubacar Keita resign.