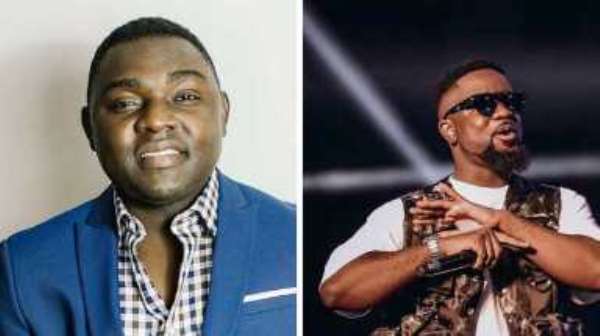 Kevin Taylor happens to be a broadcast journalist in Ghana with experience in radio and television broadcasting.

He has been in the news for going after Kennedy Agyapong and quite a number of people in the country.

An arrest warrant was recently issued on him by a court in Accra when a defamation suit was filed against him by a top Ghanaian lawyer Ace Ankomah.

In the latest development, the controversial journalist who is known for his attacks has launched a new one and this time around it is towards Ghanaian rapper Sarkodie.

Kevin Taylor said in Twi in a trending video that “we all saw the dirty jobs you did for NPP in 2015 with your songs chanting Ghanaians to sack NDC and bring NPP… Your mouth like Egyptian condom”.

It all started when Sarkodie asked Sammy Gyamfi to retract and pull down a post regarding the EC boss Jean Mensah kneeling on a Ghanaian voter and choking him in the process. The act which was rebuked by many social media commentators as it depicted the gruesome murder of George Floyd.

It seems Sarkodie’s reaction has actually pissed the journalist off as he has really taken the rapper to the gutters calling him unprintable names.

We all don’t know what the rapper did to him to deserve this but it’s obvious the journalist went too far with this one.

We know Sarkodie will definitely not forgive Kevin Taylor for dissing him ‘basa basa’ like this. Let’s see how things unfold…