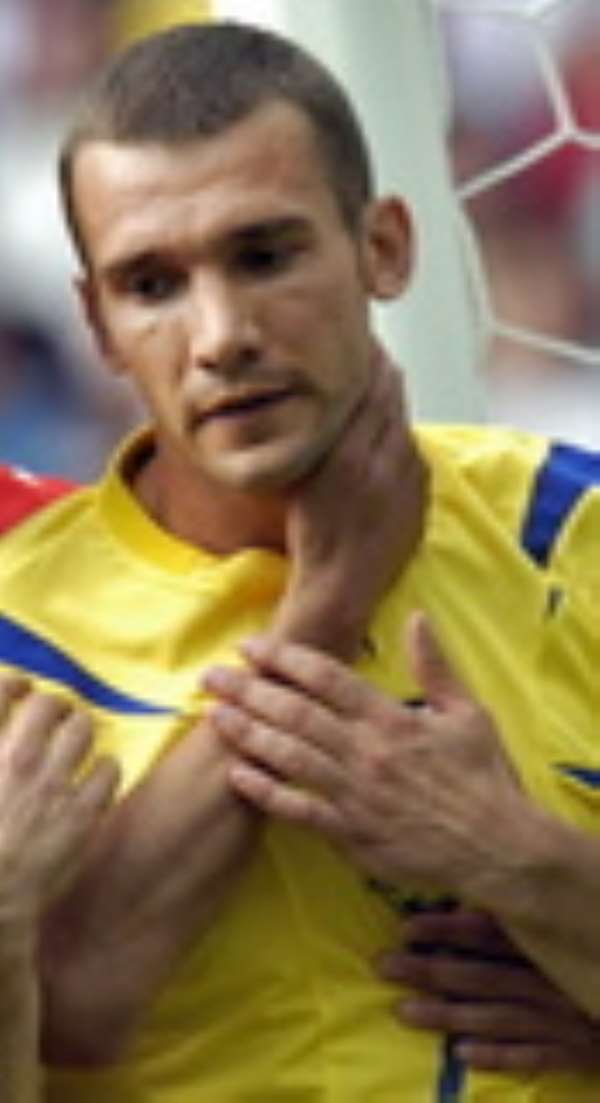 Andriy Shevchenko's 70th minute penalty proved to be enough for Ukraine to book their progression through to the Round of 16 as they recorded a 1-0 win over Tunisia in Berlin on Friday, 23 June 2006.

A win could have given Tunisia the runners up spot in Group H, but their task was made all the more difficult when they had striker Zied Jaziri sent-off for a second bookable offence on the stroke of half-time.

Roger Lemerre's side will depart Germany after having taken part in their third consecutive FIFA World Cup™, but 2006 also represents the third consecutive tournament that they have failed to get past the group stage.

As for Ukraine, competing in their first FIFA World Cup, they are now looking forward to a second round tie against the winners of Group G in Cologne on 26 June.

The match:
2': Another 72,000 sell-out crowd packed into Berlin's Olympiastadion and, though fewer in number than the Swedish, Croatian and German fans who'd lifted the roof off this old stadium in previous matches, the contingents from Ukraine and Tunisia certainly made themselves heard. The sound of drums and horns from the Africans' section never ceased during the entire 90 minutes, yet it was the equally boisterous Ukrainians who very nearly had an early cause for celebration inside two minutes. Andriy Voronin seized on a rare lapse in concentration at the back from Radhi Jaidi, but instead of going directly for goal, the Bayer Leverkusen striker attempted to thread in Shevchenko and duly wasted the opportunity with an underhit pass.

16': As the two sides sparred without going all out to land a telling early blow, Shevchenko was awarded a free-kick opportunity on the left hand edge of the penalty area. It was, however, one which he spurned, hitting the first defender with an attempted cross.

19' : Tunisia had been bested up until this point, but they were handed an opportunity of sorts when Vyacheslav Sviderskyi dove into a reckless and needless challenge 35 yards from goal. It was a tackle for which he is booked, and, from the resultant free-kick, Hamed Namouchi nearly made him pay double with a well-struck free-kick that Oleksandr Shovkovskyi did well to hold.

22': Three minutes later, the best chance of the opening half saw Shevchenko and Rebrov lead a lightning counter-attack that ended with Voronin threading through Anatoliy Tymoschuk. With the goal in his sights, the Shakhtar Donetsk midfielder unleashed a powerful left-foot shot that Ali Boumnijel could only parry clear.

24': At this stage, Ukraine were in the ascendancy and only the narrowest of touches from Boumnijel prevented Voronin from heading home Rebrov's inviting cross.

32': Shevchenko is offered his first chance. Breaking superbly on to a pass from Maksym Kalinichenko, the Chelsea striker then hesitated when one would normally have expected him to pull the trigger and, by attempting to cut back on to his left foot, gave the covering defender time to stick in a toe and divert the ball behind for a corner.

34': Tunisia ended the first half the stronger, Adel Chedli reacting quickest to a dropping ball in the area only to blaze high and wide when the ball had sat up nicely to be struck on the volley.

45+2': What would have been encouraging conclusion to the half ended in disaster for Tunisia when, in the final few seconds of the opening 45 minutes, Zied Jaziri was dismissed for a late challenge on Tymoschuk, the Tunisian forward's second bookable offence.

A change for Ukraine
56': Ukraine coach Oleg Blokhin, concerned by his side's failure to make the extra man count in the second half's opening stages, made his first substitution, withdrawing Serhiy Rebrov and introducing the more dynamic Andriy Vorobey.

60': With Spain winning against the Saudis, Blokhin's side remained understandably reluctant not to over-commit in attack, knowing that a draw would see them through.

66': Tunisia, meanwhile, also appeared strangely reticent to push forward. They did, though, come agonisingly close to scoring direct from a Anis Ayari free-kick that deflected off the wall and shaved a layer of paint off the crossbar on its way over. A couple of subsequent corners were forced, the second of which saw Karim Haggui head over from all of six yards.

70': A short, chested back-pass from Jaidi allowed Shevchenko to nip in ahead of the goalkeeper and, when Haggui's attempts to prevent the Ukraine captain converting sent him tumbling to the ground, referee Carlos Amarilla had no hesitation in pointing to the spot. Shevchenko dusted himself down to kick and, having waited for Boumnijel to commit himself, struck his penalty straight down the middle to set his team on the road to the last 16. (1-0)

79': Their noses in front, Ukraine simply returned to playing keep-ball, forcing Tunisia coach Roger Lemerre to go for broke with a double substitution that saw two strikers, Santos and Chaouki Ben Saada, introduced to the match. It was a change that almost paid immediate dividends, with Hatem Trabelsi capitalising on confusion in the Ukraine defence to test Shovkovskyi with a close-range header.

85': With time ticking down, Trabelsi took it upon himself to inject life into his team's attack and drove into the opposition box to fire narrowly wide of the far post.

88': With Shevchenko having been replaced seconds earlier, Voronin twice took it upon himself to make sure of all three points, bursting through and testing Boumnijel with a couple of fierce left-foot shots.

90+1': One final chance went begging for Tunisia, with Santos eluding the attentions of the Ukrainian defence only to head wide from six yards with the goal at his mercy.

In conclusion:
Ukraine, though nowhere near as impressive as against Saudi Arabia, just did enough to edge this encounter and deservedly progress to the last 16. Tunisia, for all their endeavour, rarely troubled Shovkovskyi and will return home rueing the lapse in concentration from Jaidi that put paid to any hopes they might have harboured of stealing the three points they needed.