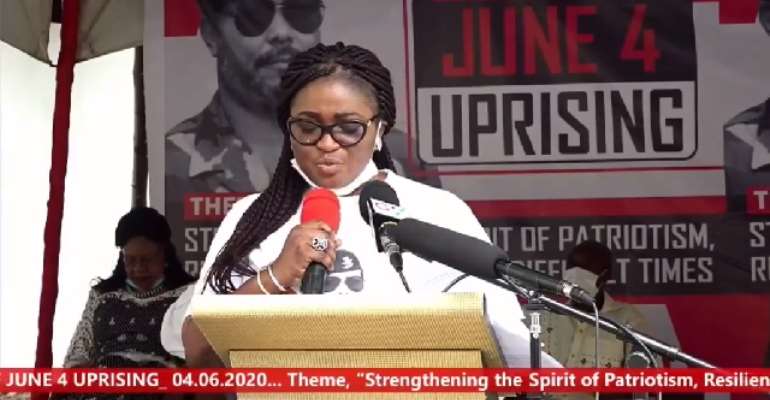 The Deputy Women Organiser of the National Democratic Congress (NDC), Maame Efua Sekyi-Aidoo, has said the biggest opposition party is united with one resolve to rescue Ghana and her citizens from the current rot of the Akufo-Addo government despite the “hurdles” being put in the party’s way by the Jean Mensa-led Electoral Commission as far as the registration of voters is concerned.

Speaking at the 41st-anniverary of the June 4, 1979 uprising in Accra, Sekyi-Aidoo said the fallen heroes and heroines of the revolution “gave women a voice in politics” and promised that: “We’ll ride on your wave of probity, accountability and integrity, which you ingrained in us, to brace the current blizzards ravaging our land by way of the coronavirus pandemic and the ‘I-will-do-whatever-I-want’ virus of the Electoral Commission and its Commissioner Mrs Jean Mensa”.

According to her, “It is evident that the EC is bent on risking the lives of millions of innocent Ghanaians with its plan to compile a new register of voters despite the loudest opposition from scores of civil society organisations, the National House of Chiefs, several political parties and the majority of Ghanaians”.

This Jean Mensa-led Electoral Commission, she noted, has seen “integrity slaughtered with reported evidence of rigging the referendum that birthed the six new regions”, adding: “It has lied on the face of documents to the citizens of this country”.

Madam Sekyi-Aidoo, who said she had a narrow escape during the Ayawaso West Wuogon by-election violence, put the blame at the doorstep of President Nana Akufo-Addo.

“We’re seeing plainly before our very eyes, a President, whose electoral machinery unleashed vicious assaults on harmless unarmed citizens in the now-famous Ayawaso West Wuogon by-election, in a manner that left some of them crippled for life”, she said.

Subsequently, she noted, the President dismissed the recommendations of the Commission that probed the matter and demanded that the “hooligans” who unleashed the gun violence be criminally prosecuted.

“Justice was never served”, she observed. “For me, as an individual, who escaped narrowly the evils of the Ayawaso incident, I am best-positioned to carry to you, Your Excellency Jerry John Rawlings, the sentiments of the victims of the said day. We pledge to keep this truth and love of our country as imbibed in us by you. It is that fearless spirit that will see the NDC, your beloved party, winning the next elections”.

As far as the EC’s actions are concerned, Madam Sekyi-Aidoo said: “I call on the EC Chair to be a mother, not just a woman; and listen to the cries of Ghanaians. Her stubbornness and foolhardiness must give way to reason. But we’re very well aware that she won’t budge. She’s demonstrated that so many times”.

“I call for the spirit of June 4th to embolden us to stand up, step out and fight the oppressors’ rule. Like the warrior queen, Yaa Asentewa, we, the women, will stand side by side, shoulder by shoulder, with our men in this fight”.

She also noted that the role of women in all these struggles, be it June 4th, 31st December and the formation of the NDC, cannot be underestimated. “As daughters of the June 4th movement, it has become more pressing that our beloved party, the NDC, reconciles with the spring source of its spirit and formation, thereby reinvigorating our rank and file in our bid to unite around our principles which started our course to this historic day of June 4, 1979”.

“Come what may, we shall overcome this blizzard just as our forebears, led by Flt. Lt. Jerry John Rawlings, overcame the turbulent era of this nation four decades ago with the spirit of oneness because we, in the NDC, appreciate the need to join forces, not only in fighting COVID-19, but also in uprooting the rot that has festered in Ghana at the presidency and several other state agencies for the past few years that the NPP government has been in power”, she added.

She also urged unity within the party for victory in the 2020 elections.

“In that same spirit, we look forward to joining hands with our father, former President Jerry John Rawlings who, we know is the epitome of integrity, probity and accountability, to win power from the NPP and President Nana Akufo-Addo in this year’s general elections; for, together, not even the EC’s hurdles can stop us from winning back power in the 7 December 2020 polls”.

“We don’t have another chance provided by the June 4th, yet December 7, 2020 provides us with the opportunity to take back government and do what is right for the Ghanaian people. We will be armed with our voter ID cards, angry at corruption, nepotism, ethnocentrism and deceit”.

“Indeed, these are difficult times but the strength and resolve of the NDC’s men and women of integrity cannot be broken – not even in these turbulent times. For we are one, we are united and resolute in our rescue mission. We are marching toward victory 2020”, she noted.