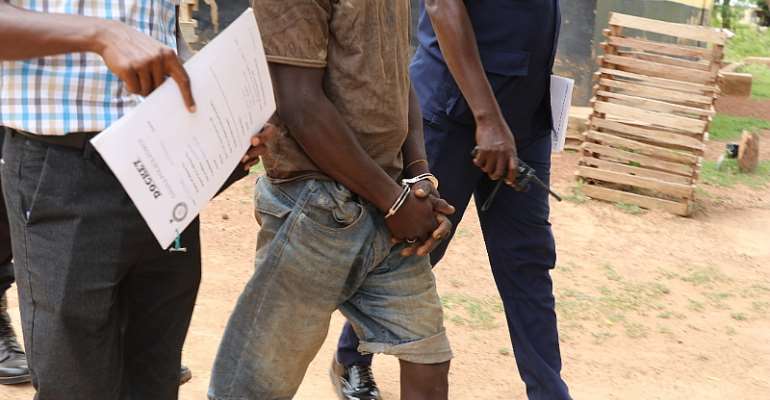 The Police in Kumbungu in the Northern Region have arrested a 25-year man for alleged indecent assault of a two-year-old girl.

According to the family of the victim, the minor together with her colleagues were playing at the Sunniya Primary School in Kumbungu where the suspect; a driver's mate, lured her into one of the classrooms with Ghc2 and allegedly assaulted her sexually.

The suspect has since been transferred to Tamale for further investigations.

Confirming the incident to Citi News, the Kumbungu District Police Station's Officer, Justice Azumah told Citi News that the suspect has been detained to assist in investigations.

“We received a case on the 1st of June, 2020. About 1:30 pm, one Abukari Jemila accompanied by the brother Abdul Rahaman, arrested and brought to the station one Danaah Sulemana; a driver's mate age about 25 years and reported that the suspect was caught in Sunniya Primary School in Kumbungu with the victim, a two-year-old girl.”

“They claimed that the suspect and the victim were both naked and the suspect was inserting his figure into the minor's vagina where he was arrested and brought to the station. That is the report we have received so far,” Station officer, Justice Azumah told Citi News.

The case has been referred to the Lamashegu Divisional Police headquarters for further investigations after the police visited the crime scene to ascertain the facts.

The father of the suspect, Yaw Acheampong Yahaya told Citi News that, an eyewitness uncovered the act and hurriedly informed his wife who was at home, leading to the arrest of the suspect.

“I was somewhere and my wife called me on the phone and told me they were at the police station with the girl. When I got there, she explained that one boy came to inform her that the suspect had taken the girl inside one of the classrooms in the school just behind our house and undressed her and put her on the floor and was trying to insert his finger into the girl's private part and gave her 2 cedis after that.”

“So my wife called another boy called Kahad in the neighbourhood and when they rushed to the scene, the suspect was there. They initially wanted to beat him but they realized that a police station was just nearby and they took him there”, Mr. Yaw Acheapong, the victim's father narrated to Citi News.

Yaw Acheampong appealed to the police to ensure his daughter gets the needed justice.

The Police are yet to receive the medical examination report from the doctors as at Tuesday, June 2, 2020, after the family initially feign interest in pursuing the case.

The victim's grandmother had called into the police station and claimed the victim was doing well after the act the next morning and demanded the police release the suspect.

“We are all the same in this community and this issue shouldn't cause any problem”, Hajia Bushira told the police.

The family was allegedly reluctant in getting the medical form endorsed at the hospital, citing money and other reasons.

But the Savanna Signatures, a gender advocacy group operating in Northern and parts of Volta Region took interest in the case after hearing of it.

Officials of the group visited the police at Kumbungu at the time and pursued the medical procedure for the family.

Sources at the Kumbungu police station say sexual offences among young girls tops all other cases in the Kumbungu District but obstructions by family and religious leaders hinder the justice process.

[Hot Video] Shatta Wale vim dies as prisoners hoot at him in...
22 minutes ago