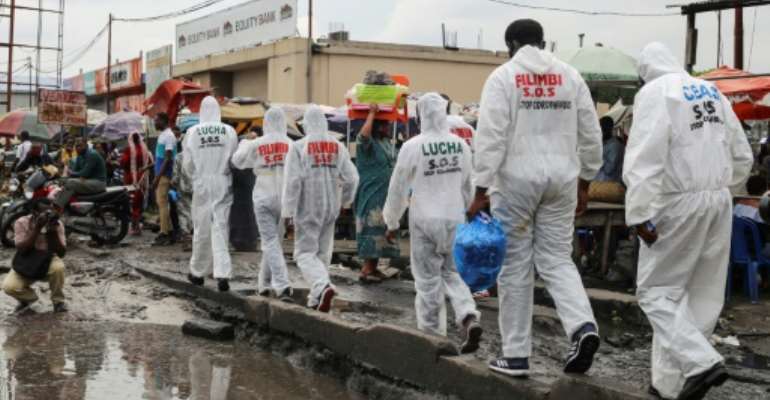 Spread the word, not the virus: COVID-19 campaigners in Kinshasa. By SAMIR TOUNSI (AFP)

"Corona is a reality. Protect yourself and protect others," Mamie Batata, a worker with the Catholic charity Caritas, warns through a megaphone as she proceeds through Kimbanseke, a rundown part of Kinshasa.

The reactions are blunt. "Get out of here." "Leave us in peace." "The disease doesn't exist."

Indifference or disbelief towards COVID-19 runs deep in the Democratic Republic of Congo's capital -- a response that strikes fear into watchdogs battling the disease.

On May 20, the official committee to fight the coronavirus said three of its workers were threatened at knifepoint, part of what the government last Friday described as "rising cases" of abuse of virus campaigners.

The hostility in the chaotic capital of 10 million people is such that Caritas and two grassroots groups called Lucha and Filimbi have resorted to going out in groups to spread awareness messages and hand out masks.

In the districts of Victoire and Selembao, they were recently greeted by scores of locals who wagged their forefinger at them in disapproval or screamed "Corona eza te!" ("there's no Corona," in the Lingala language.)

"Here in the Congo, all there is is malaria and ordinary fever. Corona is in Europe, in China," one resident, Hussein, told AFP.

"We have antibodies, from the time of our ancestors."

When official figures were quoted to him -- the DRC has documented more than 3,300 cases rising at the rate of more than a hundred a day, almost all of them in Kinshasa, with 72 dead -- Hussein was dismissive.

"It's not true," he said, demanding "proof and pictures".

Alphonse Mbelesadidi, a 43-year-old family man in Kimbanseke, said: "I do know that the disease exists, but I haven't seen people I know or in the neighbourhood die of it." 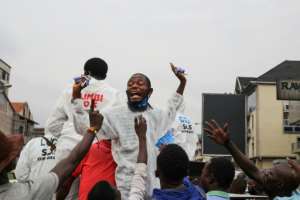 Awareness campaigners in Kinshasa say people are more enthusiastic about getting a free facemask than hearing the anti-coronavirus message. By SAMIR TOUNSI (AFP)

As recently as three months ago, denial of this kind was common in Europe and America, until the pandemic gained momentum.

But in the DRC, disbelief has been entrenched by poverty and suspicion of government -- a problem already encountered in the fight against the Ebola epidemic that erupted nearly two years ago.

Many people surviving on day-to-day jobs have borne the brunt of emergency measures that President Felix Tshisekedi introduced on March 20.

"They've closed the schools, the churches, the markets. They want to kill us bit by bit. Tell the president to scrap his measures, we don't want them, we just want to live," a woman said in Kimbanseke, loudly applauded by a crowd that quickly gathered around her.

Mino Bomponi, of the NGO Filimbi, said the public's hesitation was "understandable".

He faulted the government's communications strategy, noting that the authorities had announced the first case of coronavirus on March 10 as being that of a Belgian, whereas it was a Congolese who had been living in France.

This misstep made it harder to recover lost ground among the public, Bomponi said.

"The disease is among us, it's causing deaths, it's still spreading," he said. "The real challenge now is to eradicate the doubt which is growing among the public."

The deaths from COVID-19 include around a dozen people at the apex of power in the DRC, according to official figures.

Economy Minister Acacia Bandubola lost a brother who was a member of her cabinet, as well as a sister.

But according to the Kinshasa rumour mill, these high-profile people, as well as a senior judge, Raphael Yanyi, who suddenly died last week while overseeing a top-level trial for corruption, were poisoned.

"Scientifically, there is still no proof that has come forward to say anything other than that COVID-19 caused the deaths that we have regretfully seen in the president's circle," Tshisekedi's spokesman, Tharcisse Kasongo Mwema Yamba Y'amba, told state broadcaster RTNC, which asked him about the rumours.