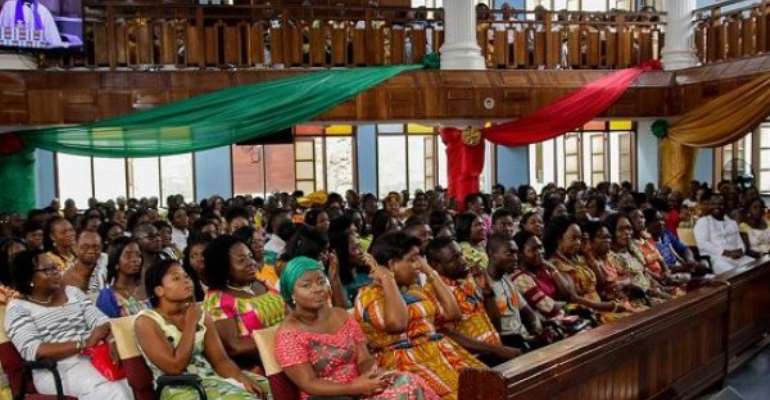 Some churches in Tema say there will be no auditorium service on Sunday even though President Akufo-Addo has given the green light starting June 5, 2020.

The churches indicated that they needed to meet, discuss and put in appropriate measures that would ensure safety of members before re-opening for service hence their decision to offer virtual service in the interim.

Reverend Kwodwo Osei-Bonsu, Minister-in-charge of the Presbyterian Church of Ghana, Redemption Congregation, Tema Community Nine, told the Ghana News Agency that his management was yet to receive detailed directives from the church's head office.

Rev Osei-Bonsu stated however that the session of the church would be having meetings to outline measures that would best suit the congregants taking into consideration the directives and measures from the President and the Ministry of Chieftaincy and Religious Affairs.

He added that they were looking at having about four services with no children service and considering having family services to ensure that families would sit together while observing social distancing.

According to him, a disinfection exercise would be carried out at the premises in addition to the provision of hand washing sets, sanitizers, social distancing, wearing of nose masks and checking of temperature when the church decides resume service in the auditorium.

He added that there would be 30 to 40 minutes break in between services to allow for cleaning while forms and appropriate apps would be used to structure the service to ensure that not more than 100 congregants attended a particular service.

The Minister-in-charge observed that God gave humans spirits and wisdom therefore the need to apply such wisdom in times of trouble.

He said the leadership of the church would ensure that members strictly obeyed the protocols adding that there would be no dancing, hugging, handshaking and waving of handkerchiefs to prevent the spread of the virus.

Reverend Francis Guggisberg Tetteh, Minsiter-in-Charge of Gateway Baptist Church, on his part, said there would also be no church service at his premises on Sunday as they were yet to receive the green light from their headquarters.

Rev. Tetteh, who is also the Chairman of the Tema Local Council of Churches, said online services would still go on until a decision was made at a meeting scheduled for Thursday, stating that they would look at the cost implication of implementing the various directives and how best to put them in place.

He said the Church was about saving of lives therefore they would not want to do anything that might endanger the lives of its members hence the decision not to immediately open the halls for service on Sunday.

Touching on other churches, he said the Local Council of Churches would not prevent any church from holding service but would rather advise them to take all the precautions and measures into consideration.

Rev Awuah said they would duly follow all the precautions, saying they would disinfect the auditorium and the premises by Friday and provide at least four hand washing sets, and hand sanitizers would be available for members, adding that they had procured face masks for members who might come to church without any.

On the issue of children's service, he indicated that they had enough classrooms on their premises which would be used for the children to ensure the observation of social distancing and the other protocols.

The Minister of Chieftaincy and Religious Affairs, Mr Samuel Kofi Dzamesi, says children's services will not be allowed.