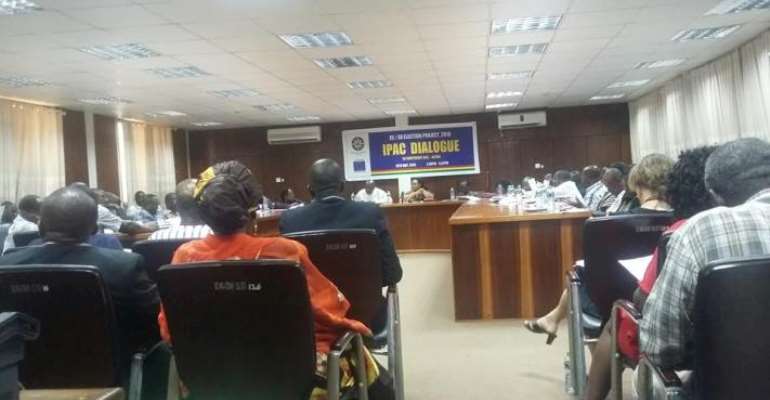 Political tension in Ghana is rising fast as the governing NPP and the Electoral Commission further push their agenda to compile new voters register, under what majority of Ghanaians describe as dubious means to rig the 2020 elections.

A strongly-worded statement by the Institute for Democratic Governance (IDEG), is cautioning against slips that can plunge the country into uncontrollable political violence.

The statement signed by Senior Research Fellow and Head, Advocacy and Institutional Relations, Kwesi Jonah described the existing political atmosphere in Ghana in relation to plans by the Electoral Commission to compile a new register of voters for the 2020 general elections, as “dangerous to the general health, peace and security, democratic stability and economic prosperity” of the nation.”

IDEG further stated that the inter-party conflict over the ideal register for the December 2020 elections has intensified the political polarisation of the nation and driving it towards potential electoral violence and constitutional crisis”. It warned ….“if this trend continues, it could cause the breakdown of multiparty democracy in the Fourth Republic.”

The international community is equally becoming worried about the trend of events leading to the 2020 elections and that has long been captured by the United States government in its 2018 Human Rights report on Ghana. A brief observation on page 13 reads …”The June ouster of the electoral commission chairperson and the president’s subsequent stacking of the Electoral Commission with persons considered to be biased in favor of the ruling party raised questions about whether the body might be used to stifle voter registration among the opposition’s base.”

Already, public opinion is heavily skewed against government’s wish especially after leaked information from the database of the National Identification Authority exposed a grand scheme that has deliberately denied millions of Ghanaians mainly in NDC strongholds their nationality or what the EC proposes to use as eligibility criteria for the proposed registration exercise. This reflected in a recent poll by GhanaWeb, the most visited news portal in Ghana.

Asked, "Should the EC go ahead with the new register?" 141,132 respondents voted in the polls between May 19 and May 20, 2020; only 19,002 persons representing 13.46% voted YES, while 121,568 persons representing 86.14% of the total voted NO. The development comes in the wake of a suit at the Supreme Court filed by the largest opposition party, NDC, against the Attorney General and the EC over the proposed new register.

Scenes at the premises of the Electoral Commission today is further sending signals to many including the diplomatic community keenly monitoring events in the country. Though the NDC boycotted the IPAC meeting called by the EC, there was an unusually heavy mobilization of security personnel, confirming suspicion about government’s strategy to adopt intimidating tactics.

Over 60 heavily armed Police officers and BNI officials in riot control gear with the buffer of armoured vehicles cordoned off the EC premises before the meeting. The combat-ready security officers led by Greater Accra Operations Commander, ACP Kwesi Ofori will not speak to the media concerned about the reason for the mobilization.

The development is further raising fear about the unknown especially after the January 31, 2019, Ayawaso West Wuogon by-election violence which saw NPP thugs in national security uniform visiting mayhem amidst gunshots at the La Bawaleshie polling centre.

The serious caution in the IDEG statement comes in the wake of recent threats and counter-threats by protagonists in both the NDC and the NPP. Few days ago, a deputy General Secretary of the NPP, Nana Obiri Boahene, threatened the governing party will unleash their thugs to beat anyone who dares to prevent the EC from going ahead with the compilation of a new register for the 2020 elections. Nana Obiri Boahene who was speaking on Accra based Okay Fm said....”Stay home if you don’t agree to the compilation of the new register because anyone who tries to disrupt the exercise will be beaten. We will beat you mercilessly. What happened in Ayawaso is just a tip of the iceberg,”.

Last week, a well-respected security operative and one of the June 4 Revolution architects, Major (rtd) Osahene Boakye Gyan (rtd) warned of impending doom should the Electoral Commission connive with the New Patriotic Party (NPP) to rig the upcoming December polls.

The former military officer accused the EC of gradually leading the country into a civil war with its bull-headedness, particularly regarding the decision to compile a new voters register.

Speaking on Okay FM’s Ade Akye Abia Programme, Osahene Boakye Gyan claimed the EC, having a desire to rig the 2020 elections with the tacit assistance of the ruling NPP, is hell-bent on having a new register. Sounding a note of caution, he pointed out that most electoral disputes in Africa have resulted in civil wars and Ghana is not immune to it, and warned that "should the EC continue to toe the line of their paymasters, it will certainly spell doom for this country."

Several security analysts have raised serious concerns about the posture of the Electoral Commission and the governing party especially about the refusal by the electoral body to build consensus on whether or not to compile a new voters register.

Concerns about voter suppression and a deliberate attempt to disenfranchise millions through the Constitutional Instrument currently before Parliament which limits, eligibility criteria to the National Identification Card and the Ghanaian passport.

On Tuesday, May 26th, the Inter-Party Resistance against the New Voter Register (IPRAN) which addressed a news conference threatened to disrupt the mass registration exercise should the Electoral Commission (EC) proceed with its plan to compile a new voters register.

Convener and Chairman of the Peoples National Convention, Bernard Mornah who addressed the media described as disappointing the EC’s move to amend C.I 91 Section 1(3), to exclude the current voter ID card as part of the primary identification documents required by an eligible voter to go through with registration ahead of the December polls.

The Inter-Party Resistance against the New Voter Register (IPRAN), which asked religious group and civil society organisations to speak against the development to avert a possible implosion further explained ……”We have heard some of the misleading and deceptive claims from the EC, ostensibly arguing that the exclusion of the existing voter ID card, was driven by a ‘school of thought’ that some foreigners may be carrying the voter ID card and some others who registered in 2012 with NHIS Card may still be on the register.

“This argument is preposterous and repulsive to say the least as the so-called reliable identification documents (Ghana Card and Passport) are also fraught with same allegation of foreigners’ infiltration and in some instances, foreigners possessing same have been arrested as reported”.

With the rising political temperature, governance think tank, IDEG’s opinion, in its statement concluded …”to turn this undesirable situation around, we urge the two major parties, in particular, and the political parties, in general, to now present alternative proposals to the EC on the basis of which the statement over the compilation of the new voter registration for the December 2020 election will be amicably and expeditiously resolved.”