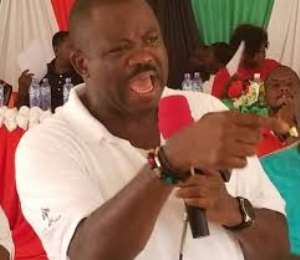 The National Organizer of the National Democratic Congress (NDC), Hon. Joshua Hamidu Akamba says if Ghanaians want to have better life, they should simply vote out President Akufo-Addo with his corruption officials come December 2020.

He said this when he hosted former appointees and Ambassadors of the Provisional National Defense Council (PNDC) and National Democratic Congress (NDC) yesterday.

According to a statement issued in Accra yesterday, the meeting was called by the NDC stalwart to acknowledge the toil and contribution of the former appointees to governance and the sustenance of the NDC party.

The statement added that the meeting was also a platform for Hon. Akamba to thank them for their invaluable service to the party and the Nation at large.

Mr. Joshua Akamba uses the platform to discuss plans for the crucial 2020 election.

Mr. Akamba and his deputies went further to charge the former appointees of the NDC to adopt a branch and start working towards the winning of the 2020 election.

"We are not in normal times at all to relent so please lets work hard for the NDC to come to power with the small that we have," furious Akamba charges.

He said they have nothing good to offer Ghanaians.

According to him, Ghanaians had so much hope in President Nana Akufo-Addo and the NPP government, yet their tenure so far has been nothing but disappointment after disappointments.

"For that reason we must be more united to work towards the rescue mission agenda outlined by the flag bearer of the NDC. We must work hard for Ghanaians to vote out the Corrupt Akufo-Addo and the NPP," Akamba intimated.