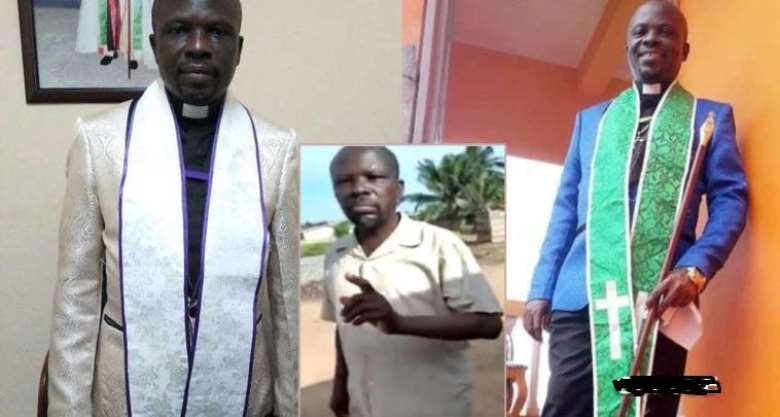 On the 19th of April, 2020, my attention was drawn to a post on a colleague journalist’s timeline that read “Just in: Ghanaian preacher Evangelist Emmanuel Kwaku Apraku popularly known as ‘Apraku My Daughter’ kicks the bucket”. I was surprised so I asked my ATWAG (Arts and Tourism Writers Association of Ghana) members if they had heard or could confirm the story, and the response I got was negative. I was relieved that the news was not true.

About a month after that, I saw a video on an old school WhatsApp platform about the late Pastor Apraku. In that video he was intoxicated and asked whoever was taking the video of him to put a stop to it. I could not bring myself to watch the video to the end because I thought, how did this man of God end this way?

About twenty (20) mins after this video was shared on that platform, some comments came in. One such comment read, “He has always been a drunkard. I hosted him a few times on Nkwa FM in Assin Fosu and he always had Castle Bridge in his car and took some shots before entering the studio to preach”. Another comment stated that he had reaped what he sowed, quoting Galatians 6:7-8. Yet another read “by their fruits you shall know them”.

As I read all these comments I wondered “Is it our place to judge a man of God”? The Bible, in Matthew 7:1-5, explicitly talks about not judging others and further warns us to remove the speck of log in our eyes before doing so for others. Luke 6:13 also warns believers not to judge and condemn others. Romans 2:1-3, explicitly reminds us as believers that for the many who judge others, you are condemning yourselves.

As I searched the Bible, my attention was drawn to a verse in James 1:26 that read “Those who consider themselves religious and yet do not keep a tight rein on their tongues deceive themselves, and their religion is worthless”.

The caution in James 4:11-12 also caught my attention. The verse 12 stressed “There is only one Lawgiver and Judge, the one who is able to save and destroy. But you-who are you to judge your neighbour?” .So then again, I ask who are we to judge the late pastor?

Dana Arcuri, in a 50- day devotional titled Harvest of Hope: Living Victoriously through Adversity stated that “Our job on earth isn't to criticize, reject, or judge. Our purpose is to offer a helping hand, compassion, and mercy. We are to do unto others as we hope they would do unto us.”

As a Christian, I can just sum up her quote and say we are to love our neighbours as ourselves as the Holy Book teaches us in Matthew 22:34-40, and in all the eight other times this phrase is mentioned in the Bible. In a world where most people hurriedly video sensitive incidents without deep thought about the effect on other people, let’s ask ourselves if we are showing love by our actions. Is it to embarrass, cause pain or call for help or justice for these people.

Watching the video, one could hear laughter in the background. The excitement in the voice of the person who took the video, in taunting the late pastor was undeniable. The person said, “I am taking a video of you to post on social media (Facebook)”. Perhaps, the saddest moment for me was when the late pastor more or less pleaded with the person to stop taking a video of him. Can we ask ourselves where the love is?

Fellow colleagues, friends, and acquaintances let’s learn to emulate Christ by obeying the greatest commandant in the Bible which is to “Love your neighbour as yourself”. Let’s learn to show this love to people in their lifetimes and not when they are dead and no more. Like today, I was amazed at the many well-wishers and neighbours who stepped out to the late pastor’s house to see his remains; all in the name of showing love.

Then again, I wondered did the late pastor not have neighbours or family to show love or care for him? Why was everyone when he plunged into drinking? Do we even know why he took up drinking? Did the show of love have to come after his death? Let’s re-think our Christianity and in doing so let’s remember the words in Galatians 6:2 “Carry each other’s burdens, and in this way, you will fulfill the law of Christ”.

Eyra Doe is a Freelance Journalist and a PR consultant