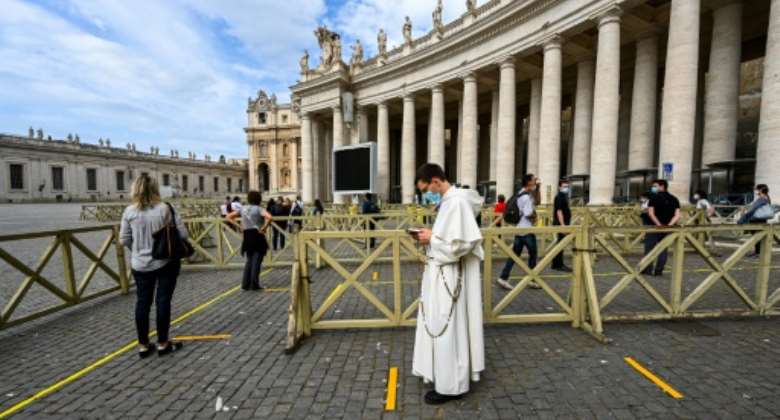 St. Peter's Basilica in the Vatican City was one of the major religous sites to reopen Monday. By Vincenzo PINTO (AFP)

France and Germany on Monday laid out plans for a 500-billion-euro ($544 billion) European fund backed by joint EU borrowing to fight the economic fallout from the coronavirus, as the continent pushed ahead towards normality with major landmarks reopening after a two month-hiatus.

St Peter's Basilica and the Acropolis in Athens opened their doors to visitors alongside many European shops, restaurants and churches, as Italy reported that its daily death toll from the virus had fallen below 100 for the first time since early March.

More than 4.7 million people have tested positive and 315,270 have been killed by the disease since it emerged in Wuhan late last year, according to an AFP tally. Recent days have seen soaring infections in Brazil, India and South Africa.

Battling against allegations from the United States and elsewhere that it concealed the scale of the problem, China vowed to back an independent inquiry into the handling of the coronavirus after it is "brought under control".

US Secretary of State Mike Pompeo criticised both China and the WHO. By ANDREW CABALLERO-REYNOLDS (AFP/File)

Chinese President Xi Jinping insisted during an address to the World Health Assembly -- the WHO's decision-making body -- that Beijing had been "transparent" throughout the crisis. Beijing also offered to share a vaccine once one became available.

But China's main critic US sharpened the tone at the same talks, accusing the WHO of being too close to Beijing.

US Secretary of State Mike Pompeo cited the move to include Taiwan in the UN health agency as a sop to Beijing, as he charged that China "continues to withhold vital information about the virus and its origins".

Amid the blame game, UN chief Antonio Guterres warned the virus' impact on the southern hemisphere could be "even more devastating" than in the global north.

In Asia, India extended its lockdown covering 1.3 billion people to the end of May as it reported its biggest single-day jump in infections on Sunday.

But natural catastrophe threatened to derail the plans to keep transmission at bay -- with Cyclone Amphan barrelling towards India and Bangladesh at speeds of 240 kilometres (145 miles) per hour, two million people face evacuation.

In Latin America, Brazil now has the fourth-highest caseload in the world at 241,000 confirmed infections, and deaths have risen sharply in recent days.

Brazilian President Jair Bolsonaro has ignored social distancing practices and criticised the need for a lockdown. By Sergio LIMA (AFP)

Far-right President Jair Bolsonaro has blamed lockdowns for unnecessarily hurting the Brazilian economy. He has defied social distancing measures, even as experts and regional leaders have warned that the country's healthcare infrastructure could collapse.

Ecuador reported the first COVID-19 case in one of its indigenous Amazon tribes, deepening the crisis in one of South America's hardest-hit countries.

Relatives have reported that the bodies of loved ones were being carted off in pick-up trucks for "express burials" without their consent.

"Mourners are forced to chase trucks with the coffin to find out where their loved ones are being buried," the opposition National Coalition said in a statement denouncing government secrecy.

There was also grim data in Africa, where the number of infections rose rapidly.

South Africa on Sunday reported 1,160 new coronavirus infections, the highest daily number since the first case was recorded in March, taking the total to 15,515 -- the highest on the continent.

The coronavirus has also left the world economy facing its worst downturn since the Great Depression. Fresh evidence of the deep economic damage came when Japan announced its first recession since 2015.

"The data we'll see for this quarter, which ends in June, will be very, very bad. There'll be a big decline in economic activity, big increase in unemployment," Powell said.

Global markets were nevertheless buoyed by the Franco-German economic relaunch plan, lower death rates in some countries --- and encouraging results from clinical trials of a potential vaccine by Moderna.

The first stage trial provoked an immune response similar to people convalescing from the COVID-19 disease in eight recipients, according to the company. It has a larger phase 2 trial involving more patients due to begin soon.

In a sign of solidarity, French President Emmanuel Macron and German Chancellor Angela Merkel proposed "borrowing from the market in the name of the EU" to fund 500 billion euros of spending on the 27-strong bloc's "worst-hit sectors and regions".

Countries benefiting from the financing would not have to repay the sum, said Macron.

Gondoliers returned to the canals of Venice, even if they are now wearing masks and gloves. By ANDREA PATTARO (AFP)

"The aim is to ensure that Europe comes out of the crisis more cohesive and with more solidarity," said Merkel, calling the proposal "courageous".

If agreed with other EU members, the fund would break through the bloc's fiscal deadlock. Northern countries such as Germany have until now firmly rejected joint debt in the name of budget discipline.

But it immediately ran into resistance, with Austrian Chancellor Sebastian Kurz insisting that any help "has to be in the form of loans, not grants".

With infection numbers falling, Europe sought to pick up the pace on its exit from the lockdown.

In Venice, the gondolas returned to the waters again, even if the gondoliers wore gloves and masks. Locals welcomed the sight.

"It's good news, a sign of everyone's desire to get back to normal as soon as possible, but without ever lowering our guard in order to defeat the virus once and for all," said Giovanni Giusto, city councillor for the Protection of Traditions.