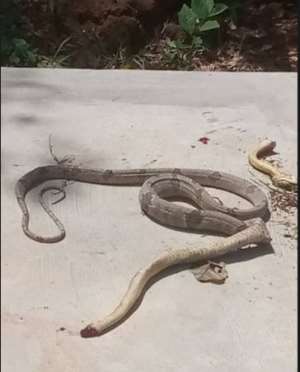 Nurses at Nyankumase Community Based Health Planning Services (CHPS) in the Upper Manya Krobo District of the Eastern region have become snake hunters as they are troubled by the invasion of the deadly creatures at the facility including reptiles.

Three big snakes have been killed this year after invading the premises of the facility. The Health workers say “the number of Scorpions killed are uncountable “.

The latest incident occurred Wednesday, May 13, 2020, when a big snake slithered into the compound of the health facility.

The nurses ran helter-skelter while screaming for help.

The snake was eventually killed by some residents staying around the facility.

According to the nurses they are gripped with fear anytime they report to work, particularly when attending to emergency situations in the evening because the community has not been connected to the national grid of electricity exposing them to danger.

Nyakumase CHPS serves many farming communities but facing logistical challenges including inadequate medical supplies and lack of Motorbike for transportation.

The road connecting the community is also in a deplorable state while the mobile network is very weak.