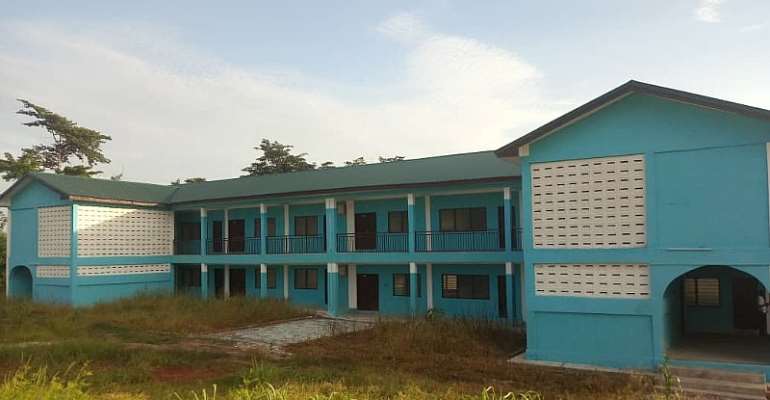 Each Senior High School (SHS) in the Bono region is benefitting from infrastructural projects under the government’s ‘Emergency Projects’ aimed at creating more space to end the Double Track system being implemented as part of the Free SHS programme.

Construction works on the Emergency projects, which are being funded by the Ghana Education Trust Fund (GETFund), started in the last quarter of 2019 and are all expected to be completed and handed over to government, and subsequently to the beneficiary schools by the end of July this year. Some of the projects have already been completed.

The projects are mainly additional dormitories furnished with beds and mattresses and mechanized boreholes, and classroom blocks which also come along with tables and chairs to make the facilities useable as soon as the schools re-open.

Sunyani Senior High School, for instance, has been provided with a new 12-unit classroom block and two new dormitories – one for males and the other for females. Each dormitory can accommodate a minimum of 500 students at a time.

Chiraa Senior High Schools in the Sunyani West Municipality is also benefitting from four projects made up of three new dormitories – one for male students and the remaining two for the female students as well as a 6-unit classroom block.

At the time of our visit, one of the dormitories had been completed while the rest were at various stages of completion.

The Bono Regional Chairman of the ruling New Patriotic Party (NPP), Kwame Baffoe, the Regional Co-ordinator of Free SHS, Evans Kusi Boadum together with other regional executives of the party have been touring the various senior high schools in the region to assess the progress of work on the projects.

The Headmaster of Chiraa Senior High School, Nana Antwi-Boasiako, told the media that as a result of the massive expansion of infrastructural facilities provided by this government, the schools will be able to increase enrolment and also end the Double-Track system by September this year.

According to him, this is the first time the school has witnessed such infrastructural development by a single government since its establishment several years ago and commended the current administration for the good work done.

Chairman Abronye expressed his satisfaction with work done so far by most of the contractors, adding that government will soon take a firm decision on the few contractors whose projects appear to have stalled along the way.