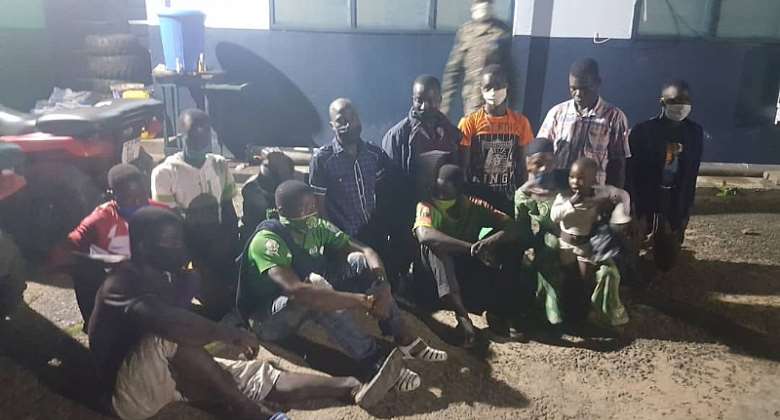 Some 36 persons have been arrested for attempting to enter Ivory Coast through unapproved routes in the Western Region.

These persons were arrested on May 12 and May 13 by immigration officers in the region.

On May 12, a team of Immigration officers on patrol picked up 12 Burkinabes a Ghanaian and a baby, belonging to one of two Burkinabe women who were arrested, were intercepted and prevented from using one of the unapproved points at Nzemtenu near Appollenu in the Jomoro District.

According to a release from the region, the Half Asini command of the Ghana Immigration Service cited cooperation from concerned community members as being instrumental in the May 12 arrests.

“Investigations revealed that these suspects are unrelated and therefore had accidentally arrived at Nzentenu community almost at the same time; that explains their arrest at different locations within the community.”

After their arrests, Port Health Officials took their samples for testing has quarantined them.

The borders were closed in a bid to stop the spread of COVID-19 amid the ongoing pandemic.

On these persons arrested, the Assistant Inspector Manford Akakpo, the Western Regional Public Relations Officer of the Ghana Immigration Service said: “The municipal security council met and decided they should be quarantined and their samples take after which their results will determine their fate. Currently, 13 people have been quarantined.”

For the May 13 arrests, 11 Ivorian nationals were intercepted at Berlin, an unapproved entry point near the Newtown Border Post.

They have since been escorted back to the Ivorian security to be returned, according to the service.

On the same day, two Nigerians, one Ivorian, one Guinean, on Beninese and seven Burkinables were refused entry int Ghana at Appolenu.

In a related development, one other Burkinabe has been arrested in the Upper West Region after the arrest and repatriation of five Burkinabes on Tuesday.

This latest arrest brings the number to 205 of foreign nationals arrested on the Ghana-Burkina Faso border in the Upper West Region.

“So far about we have arrested the person and we were laying an ambush for another arrest.”