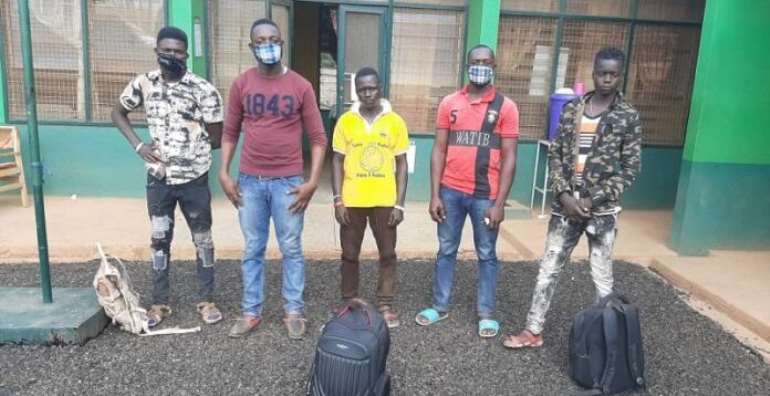 Some five Burkinabes who were apprehended by Immigration personnel for attempting to enter Ghana illegally have been repatriated.

The five were apprehended at an unapproved route in the Upper West Region.

This brings to 204 the number of foreign nationals arrested on the Ghana-Burkina Faso border in the Upper West Region.

“They were arrested immediately at the point of entry. What we did was that we took them to the Hamile border post where they were screened by the port health personnel and they were handed back over to their country's authorities, that is the Burkina Faso authorities. So, they have been repatriated. Most of these arrests have been done in the Upper West Region. We don't only arrest those who are coming in but also those who are going out.”

“There was an incident where we arrested some 39 Burkinabes who were resident in Sampa before the border closure and in the course of it they, knowingly or unknowingly, were trying to travel back to Burkina Faso. So when they got to one of our in-land check posts we detected that they were Burkinabe's and their final destination was into Burkina Faso. Knowing that the border had been closed, we quickly had to send them back to Sampa until the border is opened then they can be allowed to go home,” he added.

The all-male ECOWAS nationals whose ages ranged between 15 and 34 were ceased on two motorbikes with Burkina Faso registration numbers.

Investigations revealed that they were destined for Kumasi and Techiman for farming and trading activities.

There have been several attempts by Burkina Faso nationals to cross into Ghana for greener pastures through unapproved routes in the Upper West Region after the closure of the country’s borders to prevent the spread of the novel coronavirus.

President Akufo-Addo following the outbreak of Coronavirus (COVID-19) in Ghana announced the closure of Ghana's borders-Land, Sea and Air.

Following the extension of the closure of the borders, it will expire on May 31, 2020.