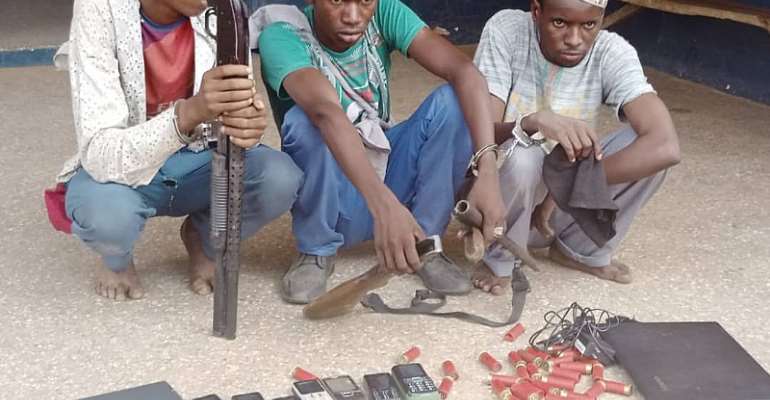 The laptops stolen by three suspected criminals have been identified by one Issah Fuseini, a victim and a native of Widana near Pulmakom in the Pusiga District of the Upper East Region.

Police say few days after ModernGhana filed the report about the arrest of the criminals, one Issah Fuseini, a victim, came to Zebilla police station and identified the two Lenovo laptops as his after unlocking them.

According to Superintendent Ahmed, upon examining the laptop carefully, they got to know that the laptops belong to the victim as he was able to provide the password to the laptops and after booting it, his photograph was displayed on the background of the laptops.

The victim Issah Fuseini narrated that, on the 9th of May, 2020 at around 1:30am he was driving an unregistered Toyota highlander with DP registration number together with his wife and other three family members on board from Kumasi to Widana near Pulmakom.

According to the victim, Issah Fuseini, upon reaching a section of the Zebilla/Bawku highway at Kubore, a small of Zebilla four unidentified armed masked men wielding a pump action gun and machetes attacked him together with the others and made away with his two Lenovo laptops, cash of Ghc5,500.00 and mobile phones after injuring his right eye.

He said a complaint was lodged at Bawku Divisional Police Command with investigations ongoing.

Meanwhile, the joint Police and Operation Conquered Fist personnel who are poised to clamp down criminals in the area on Monday, 11th may, 2020 during one of their night patrols brought a locally made pistol with one live BB cartridge concealed in a white polythene bag.

About 22:30hours while on their snap checkpoint duty at Sakom on the Zebilla/Binaba road, a certain unidentified young man on board a motorcycle who was approaching the checkpoint from Zebilla to Binaba direction was signaled to stop with a flashlight. That the said suspect Rider made a sudden U-turn and sped off.

The Police gave him a hot chase and in the process, the suspect dropped the white polythene bag containing the exhibits and fled.

A joint team of Police and Operation Conquered Fist personnel in Zebilla in the Bawku West District of the Upper East Region were on 11th May, 2020 arrested three suspected criminals during a swoop at Kopela, a community in Binaba.

The suspects, Amidu Salifu 23, Salifu Tongere 24 and Nuhu Azumah 14 are all Fulani herdsmen.

The three suspects were arrested when the team conducted a series of searches in the district to clamp down criminals who have been terrorising market women and mobile money vendors in the area.

A search on them led the team to retrieve one single barrel gun, one pump action gun, thirty (30) live BB cartridges, two Lenovo laptops, seven (7) assorted keypad mobile phones and face mask which were in their possession.

The Zebilla Police Commander, Superintendent Ahmed Adam Mahama, speaking to ModernGhanareporter in Zebilla after the exercise said, the suspects, upon seeing the team abandoned the items and took to their heels.

He said, after a hot chase, the team managed to arrest them.

Superintendent Ahmed added the first two suspects were arrested near a bush which is about 400metres away from their hideout (shelter) at Kopela who led them to arrest the remaining suspect at their hideout where the items were found in their possession.

The suspects have since been processed and arraigned before Court.

Supt Ahmed stressed that the police and Operation Conquered Fist personnel will not rest on their horses as they plan to continue with their intelligence gathering patrols to bring all persons terrorising the township and making life unsafe to book.

According to him, the exercise is a directive from national headquarters to all divisional, districts and unit commanders to make sure criminals are brought to book, an exercise they have taken it upon themselves to ensure no criminal find the place a safe heaven to commit their crimes.

He added that they have doubled their steps on activities in and around the Zebilla township and warn persons engaging in all manner of criminal activities to desist from such negative attitudes or face their wrath.

Superintendent Ahmed Adam Mahama, called on residents of Zebilla to assist them with information to help flush out criminals.