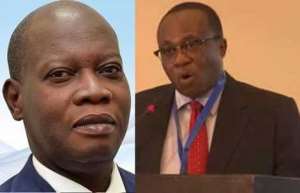 Three former appointees of the immediate past National Democratic Congress (NDC) administration were yesterday sentenced to a total of 16 years by the Accra High Court for causing financial loss of $3 million to the state.

They were found guilty in the case involving the purchase of a $4-million cyber security surveillance equipment, known as the Pegasus machine, for the National Security Council Secretariat (NSCS), which was sponsored by the National Communications Authority (NCA).

In the dock were Eugene Baffoe-Bonnie, a former Board Chairman of the NCA, who was sentenced to six years imprisonment, and William Matthew Tetteh Tevie, a former Director-General of the NCA, and Alhaji Salifu Mimina Osman, a former Deputy National Security Coordinator, who will each serve five years in prison.

Baffoe-Bonnie will serve more years in prison because the court held that he personally benefited from the deal to the tune of $200,000.

Seizure of assets
Aside from the custodial sentence, the court, presided over by Justice Eric Kyei Baffour, a Justice of the Court of Appeal, with additional responsibility as a High Court judge, also ordered the state to seize the assets of the three convicts to the tune of $3 million to offset the amount the state lost as a result of their actions.

The remaining $1 million of the $4 million has already been refunded to the state.

The case, which was initiated in December 2017, was the first criminal prosecution by the Attorney-General (A-G), Ms Gloria Akuffo, against officials in the previous administration accused of corruption.

Scene in court
There was a heavy security presence at the court.
As Justice Kyei Baffour read out the sentences, it was a scene of despair and shaking of heads by sympathisers and lawyers of the convicts.

As for the convicts, they had their heads bowed in sombre reflection as the court determined their fate.

Baffoe-Bonnie was separately found guilty of using public office for profit and money laundering due to the $200,000 he benefitted from the deal.

The court held that the prosecution successfully proved the guilt of the convicts.

“The prosecution proved the charges against the accused persons beyond reasonable doubt to the standard required by law,” Justice Kyei Baffour held.

Abuse of position
Before the judge pronounced the sentences, lawyers for the convicts had prayed the court to temper justice with mercy on the basis that their clients were first-time offenders.

Counsel for Tevie, Mr Godwin Tameklo, particularly made a passionate appeal to the court not to give his client a custodial sentence due to his ill health.

He said his client had a health condition which required expensive treatment and, therefore, sending him to prison would amount to a death sentence.

“In the wake of the COVID-19, and with his underlying condition, a custodial sentence will be a death sentence for my client,” he had pleaded with the court.

Judge’s reaction
However, in passing sentence, Justice Kyei Baffour said he took into consideration the fact that $3 million of public funds had been wasted and also the fact that the convicts were persons who were in positions of trust.

He said the citizens of Ghana expected their taxes to be used wisely and not “to be thrown away by public officials placed in positions of trust”.

“As persons who were in positions of trust, they completely failed in the discharge of their duties. In this circumstance, an exemplary and deterrent punishment is necessary to send the right signal to public service holders that if they fail to be good custodians of the resources of the state, they will not be let off the hook by the law,” he said.

Not guilty
A businessman, George Derek Oppong, who was also accused of acting with the convicts to cause financial loss to the state, was, however, acquitted and discharged by the court.

Oppong is the Managing Director of Inferlocks Development Limited (IDL), the local company that served as the link between the NCA and NSO Group Limited, the Israeli company said to have manufactured the cyber security surveillance equipment.

Justice Kyei Baffour held that it was the three public officials, and not the businessman, who were responsible for whatever harm was done to the state in the purchase of the equipment.

According to the court, evidence on record showed that Oppong was a businessman who engaged in what he perceived to be a legitimate business venture and, therefore, he could not be faulted for the actions of the three public officials.

“He had no idea as to the reckless throwing to the wind of sound bureaucratic practices and corporate procedures that the other three accused persons had embarked upon,” he held.

A former board member of the NCA, Dr Nana Owusu Ensaw, who was also charged for being part of the scandal, has already been acquitted and discharged after the Court of Appeal ruled that there was no substance in the charges levelled against him.

NCA scandal
The $4-million NCA scandal happened in 2016.
The prosecution presented a case that, hiding under the guise of perceived terrorism threats against the country, the three convicts decided to dissipate state funds by hatching a plan to purchase a cyber security equipment which was supposed to be used to monitor and listen to phone calls of suspected terrorists.

According to the prosecution, the said deal was fronted by Osman, who, apart from being a Deputy National Security Coordinator, was also a board member of the NCA.

As part of the deal, the prosecution said, the plan was for the NSCS to request for $8 million from the NCA for the purchase of the equipment, since the NSCS did not have that amount.

It said through unlawful actions of Baffoe-Bonnie and Tevie, the NCA provided $4 million for the NSCS, based on a fictitious request from the secretariat which was provided by Osman.

According to the state, the remaining $3 million was later squandered by the three former public officials.

Court’s reasons
During the trial, the convicts and their lawyers argued that the $4 million was duly provided by the NCA, in accordance with law, for the purchase of the equipment.

Furthermore, they averred that the amount was an institutional support from the NCA to the NSCS, following a request from the NSCS.

According to the defence, the NSCS requested for $8 million but the NCA was able to provide $4 million.

No evidence
The court, however, held that there was no evidence on record to show that the $4 million was approved by the NCA Board, nor was there any evidence that the NSCS, as an entity, was even aware that any such request had been made to the NCA.

Rather, it held that the deal was orchestrated by the convicts and implemented without due process, with the state being the loser.

Again, the court held that there was no indication that the cyber security equipment had been put to use for the benefit of the country, since the evidence showed that it “had been packed and forgotten in a private residence”.

Also, it said the purchase of the equipment was in contravention of the public procurement laws of the country.

Baffoe-Bonnie’s confession
One major piece of evidence that the prosecution relied on for its case was a confession statement given by Baffoe-Bonnie to the Bureau of National Investigations (BNI) during investigations into the scandal.

The former NCA Board Chairman is said to have told the BNI that the scandal was, indeed, true, and that he and the other accused persons had benefitted from the deal to the tune of $500,000.

He said he personally got $200,000.
Lawyers fight back
During the trial, his lawyers made many efforts for the court not to accept the confession as evidence.

They argued that Baffoe-Bonnie was coerced and was under duress when he made the said confession.

However, in the judgement yesterday, Justice Kyei Baffour held that the evidence on record showed that Baffoe-Bonnie gave the confession on his own volition.

He held that Baffoe-Bonnie drove to the BNI with his lawyer and made the confession on his own free will.

It was the said confession that led to Baffoe-Bonnie being found guilty of using his public office for profit.

However, the claims he made in the confession that the other convicts also received a share of the deal was dismissed by the court.

“The confession of first accused (Baffoe-Bonnie) is binding on him alone and not on the other accused persons,” the presiding judge held.