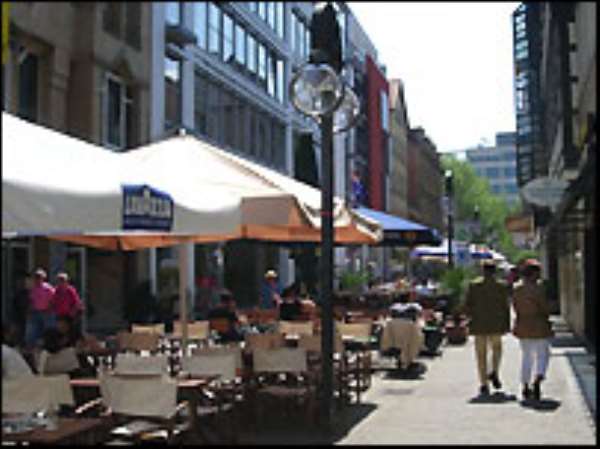 "I am sick of the World Cup already," sighs the middle-aged waitress as she wearily serves up a large glass of the local Dinkelacker beer.

She is far from alone among her fellow citizens, in feeling a little jaundiced at the barrage of World Cup-related advertising being churned out by German TV, radio and press in the run-up to the tournament.

Still, Stuttgart has taken a relatively reserved approach to the global football festival, due to kick off on 9 June, than most other host cities in Germany.

In fact, the capital of the southern state of Baden-Wuerttemberg - with a population of approximately 590,000 and a reputation as a centre of culture - is taking the World Cup hype in its stride.

That does not mean that the tournament is not important to the city or region, in terms of tourist and commercial opportunities.

It simply means that the World Cup has to slot into the existing calendar of summer attractions, which includes a rich diet of art exhibitions, plays and classical concerts.

Indeed, the city centre boasts as many posters advertising concerts of Wiener Klassik music as it does World Cup ones.

"Maybe it is just our understated way," says Veit Haug, director of the Stuttgart Region Economic Development, who is on a mission to boost the city's small and medium-sized businesses.

"But we know there will be lots of people coming here for the World Cup and that they will be wanting to spend money in Stuttgart.

"Perhaps our marketing of ourselves and the region in previous times has not been as forceful as it could have been, and we look on the tournament as another important way to get our name across."

As well as being home to Mercedes-Benz and Porsche, the city and region are leaders in German scientific, academic and research organisations.

"It is a chance to show that we have a strong economy, and that it is a knowledge-based economy," says Mr Haug.

"We hope the World Cup will be a chance to showcase our products - which we hope will then be bought, and also a chance to encourage people to come and visit again after the football."

Stuttgart is playing host to six games, including the prestigious 3rd/4th place play-off, and more than 100,000 visitors are expected during the four-week tournament.

Beate Geier of Stuttgart Marketing says a sign of the popularity of the forthcoming tournament is that most hotel beds in the city are now taken.

"The whole region is taking people in, and our good public transport systems mean people can come in and out of the city from outlying towns without problems," she says.

"The World Cup is very important to us, it will mean very good trade for our local shops, restaurants and hotels, and apart from this we do hope the tournament attracts other long-term investment."

One attraction which does seem set to benefit is the new Mercedes-Benz museum, situated just across Mercedesstrasse from the Gottlieb-Daimler football stadium.

The company admits it pulled out all the stops to get the museum open on 20 May, three weeks before the 18th World Cup gets under way.

Martin Gentischer, responsible for promoting the futuristic building, says: "One of the aims was to be ready in time for the tournament.

"The World Cup gives us a chance to sell the museum and promote the name of Mercedes-Benz to people from all around the world this summer. We wanted to make sure we could capitalise on this international opportunity."

The museum will be open on World Cup match days and the hope is that some fans will call in before heading off to support their nation.

Meanwhile, outside Stuttgart at the Wuerth tools and assembly conglomerate, they have had a visit from "Der Kaiser" himself: former German World Cup-winning manager and player Franz Beckenbauer.

The firm prides itself on its backing of the arts and sports, and Beckenbauer was on hand to open the company's own Wuerth World Cup for teams of employees.

"Although we are not involved in sponsoring the World Cup, we do own a hotel that the Australian football team is staying at during the tournament," says the firm's Sarah Meckel.

The firm is also a partner of the Germany-Land of Ideas initiative, a public-private partnership which aims to showcase leading commercial organisations from the nation during the World Cup, both at home and abroad.

"We believe we have good innovative products, and want to strengthen our position in the German market," says Mrs Meckel.

Famous German companies as well as co-operation partners from science, culture and society support the "country of ideas".

They are using the opportunity of the World Cup to show the world that, as Mrs Meckel puts it: "Perhaps the economic situation in Germany is not as bad as it can sometimes seem."

Meanwhile, back on the streets of Stuttgart, the city continues in its low-key way to get ready for the World Cup.

However the attention to detail that is being paid on new roads, pavements, signage, and stadium alterations shows how seriously the city is taking things.

"While it is not in our psychology to over-estimate what the tournament can do for us, we really hope the World Cup is a catalyst for Stuttgart," says Mr Haug.