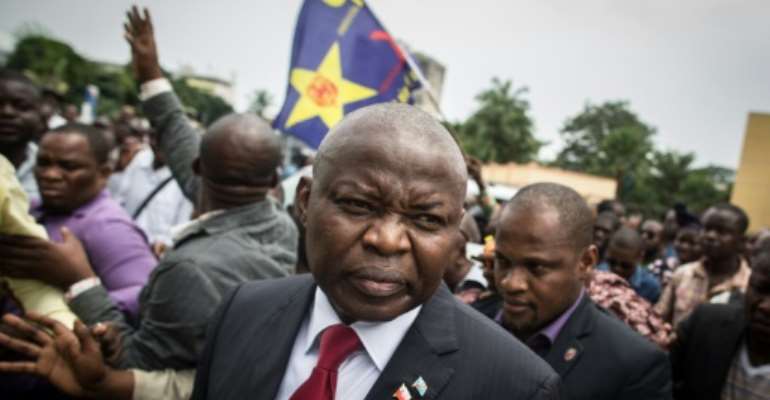 Vital Kamerhe has been a powerful player on DR Congo's political scene for two decades. By FEDERICO SCOPPA (AFP/File)

The powerful top aide to DR Congo's President Felix Tshisekedi goes on trial for corruption on Monday in a case without precedent in the vast African country.

Tshisekedi's chief of staff Vital Kamerhe, who has been at the very heart of political life in DR Congo for two decades, is accused of embezzling more than $50 million.

Kamerhe, 61, has been in custody since April 8 and goes on trial with two other defendants, a Lebanese businessman and another presidential official.

"Never in Congo's political history over the past two decades has such an important player on the political scene been put behind bars," New York University's Congo Study Group (CSG) said in an analysis.

The case against Kamerhe is part of a broad investigation that is supposed to mark the "renewal" of the Congolese justice system in the fight against corruption among the elite since the country's independence in 1960.

Kamerhe, once a pillar of the regime of former president Joseph Kabila, is the leader of the influential Union for the Congolese Nation and previously served as parliamentary speaker.

He emerged as Tshisekedi's main ally in his quest for power after he himself bowed out of the presidential race in December 2018, the first peaceful power transfer in the history of the Democratic Republic of Congo.

The defendants are accused of embezzling $48.8 million from funds for building 1,500 pre-fabricated homes for poor people under a "100-day" action plan launched by Tshisekedi after he took office in January last year.

They also allegedly siphoned off $2.13 million from a programme to build housing for police and the military in Kinshasa.

Kamerhe, who has not stood down or been sacked since being charged, denies the allegations against him.

The trial is due to take place in the Makala prison compound where Kamerhe has been held for more than a month and will be broadcast to the country on television.

The biggest country in sub-Saharan Africa, the Democratic Republic of Congo has an abundance of natural resources, but most of its 80 million people live below the threshold of poverty.

The country struggles with a long history of conflict, poor governance and graft.