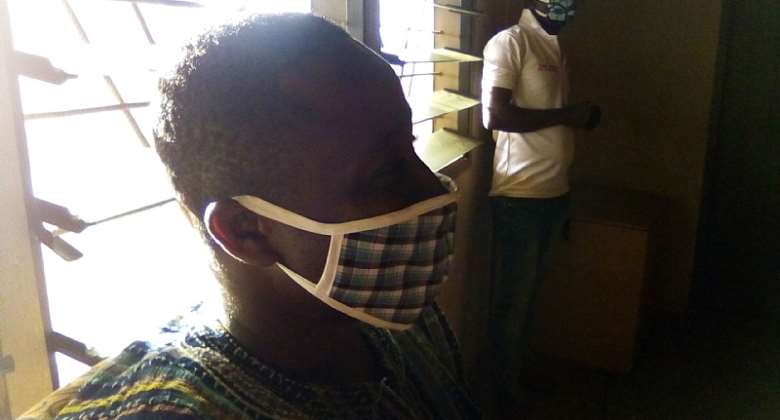 The District Chief Executive of Dormaa East in the Bono Region who is also the Chairman of the District Public Health Emergency Committee in charge of COVID- 19, Hon. Emmanuel Kofi Agyeman, has announced the compulsory use of nose mask by the people of the District from Monday, May 11, 2020.

The announcement which has become necessary, is in conformity to H.E the President's statement on the wearing of the mask as a preventive measure when he last addressed the state on the pandemic and a measures which has also been adopted as an effective tool by the District Public Health Emergency Committee (PHEC) to protect the people from the disease.

In a media briefing last Thursday on updates of activities earmarked to prevent the disease at the District, the DCE said ,7000 nose mask would from Monday be distributed to persons living with disability, leap beneficiaries and other vulnerable groups.

He added that out of the 7000, 2000 were received from the Local Government Ministry whiles 5000 are being produced locally by some trained PWD of the District. He explained, the enforcement delayed till now, due to the insufficient nose mask both at the assembly and on the market as well inadequate education on it's use.

He passionately appealed to everyone, to as a matter of urgency, get a nose mask, since it would be strictly and legally be required in the coming days, of anyone to access public places, transact businesses and the likes.

Hon. Agyeman said, though the District has no confirmed case of the virus, the Bono Region, has confirmed its first case. He however advised the people not to panic but continue in their obedience to all the directives already in existence in the fight and ensure self-discipline to contain the pandemic.

In the bid to ensure free water supply to the markets and to the people of the district as directed by government, the Chairman said Ghana Water is repairing 21 pipe borne water stands across the district and two private mechanized water operators are freely supplying water to people of their communities in this 3 months of free water supply as their contribution to fighting the pandemic. He added that in order to ensure a better hygienic condition alongside, the district assembly has cleared it final disposal sites and purchased two motor-king tricycles branded to lift and empty waste bins to ensure sanity in the District

The DCE extended his warmest gratitude to the media and to all individuals and groups who have contributed in various ways in the fight of the deadly COVID 19.

In an advice, the Hon. DCE said, it would just be appropriate to be each other's keeper by wearing nose mask so that we protect each other against the deadly disease when in public or using any public facility.

In a meeting last Wednesday, the PHEC unanimously agreed that the wearing of nose mask become mandatory anytime one is outside home and would be adopted among other implementing measures put forward to fight the disease.