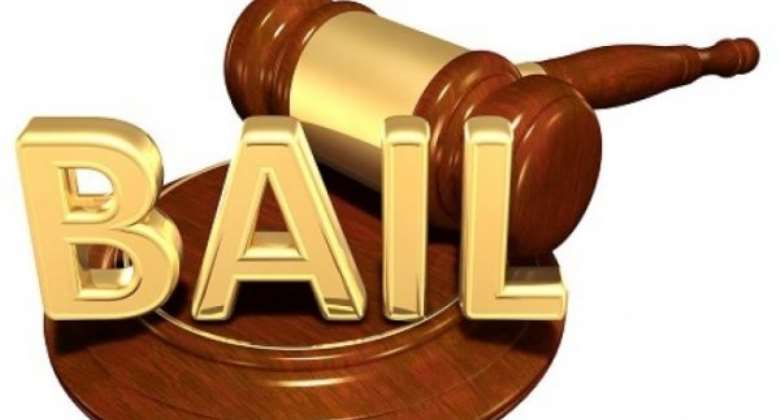 The eight are to report to the Bureau of National Investigation (BNI) twice a week as well as deposit their passports with the Court's Registry.

It was the first time all the accused persons had appear before the Court presided over by Justice Samuel K. Asiedu, an Appeals Court Judge sitting in as an additional High Court Judge after their committal proceedings on March 3, 2020.

Already, Assistant Commissioner of Police (ACP) Benjamin Agordzo has been granted a self-recognisance bail of GH¢500,000.00 by an Accra High Court presided over by Justice Charles Ekow Baiden, whilst Warrant Officer Class Two Esther Saan has also been granted bail by another High Court.

Only ACP Agordzo, WOI Saan, and Colonel Samuel Gameli were in Court on Friday when the case was called as the rest had been remanded into prison custody and were not in court due to the observance of the COVID-19 protocols.

All ten accused persons were supposed to be present at the Court for their pleas to be taken. They are expected back on June 5.

He stressed that especially, the soldiers among them had the Provost Marshall monitoring every movement of them, and also that they had been in custody for almost a year and by law are innocent until proven guilty and so that remand should not be used as a way of punishing them.

He said his clients had been publicized as being wicked so they were determined to appear before court to prove their innocence and their family members who are people of substance would stand surety for them.

Mr Tony Lartey, lawyer for Zipki said his client would not run because Ghana's borders were closed due to COVID-19, adding that his client was Asthmatic and had High Blood Pressure which was getting worse and if not granted bail would not live to see the end of the trial.

Miss Hilda Craig, a Senior State Attorney in opposing the bail said they would not appear before court to stand trial when granted bail.

The Kaneshie District Court on Tuesday, March 3, 2020, committed the ten accused charged with treason to the High Court to face trial.

Mrs Eleanor Kakra Barnes-Botchway, the presiding judge, committing them said the Court after listening to the Prosecution, their counsel, as well as examining the facts, among other documents was overwhelmed with the evidence and said there was the need for them to answer the charges at the High Court.

She therefore remanded them into prison custody except Mr Agordzo who was on bail, but Colonel Samuel Kojo Gameli, a senior military officer and Warrant Officer Class One Esther Saan, alias “Mama Gee,” are also currently on bail but had not been able to meet the bail conditions.

The facts are that Mac-Palm, Kafui, Debra, ACP Agordzo is a police officer and the rest officers of the Ghana Armed Forces (GAF).

They were all members of the Take Action Ghana-a Non-Governmental Organisation, incorporated by Mac-Palm in 2018 and that the group planned to demonstrate against the government as well as overtake it, so Mac-Palm contacted Kafui, a resident of Alavanyo to manufacture arms for that purpose and he produced them.

Colonel Gameli was said to have promised to give his support before, during and after the planned event and when Kafui brought the 22 explosives, six pistols, three grenades and five ammunitions, Mac-Palm accommodated him, adding that all took place from June 2018 and September 2019.

The Prosecution said Mac-Palm was said to have also provided a quantity of substance which when inhaled, would make one sleep for an hour, thus upon a tip-off, Mac-Palm was arrested on September 19 and the rest subsequently.

Hottest Photo Reports
Catch up with all the political quotes from our politicians.
Advertise here
More Headlines
ModernGhana Links
Asantehene charges IGP to combat proliferation of arms
Let's disband witch camps; it's barbaric, indictment on conscience – Jane Naana
Some few cops use the ammunition to engage in criminal activities, weed them out — Asantehene charges IGP
1st Deputy Speaker’s ruling on motion for rescission of approved 2022 budget wrong – Iddrisu Haruna
Court withdraws arrest warrant for Xavier-Sosu after reporting himself
Joe Wise ‘abandons’ seat for 2nd Deputy after chaotic ruling on Minority’s motion
All my appliances have been destroyed by ‘dumsor’ – Otumfuo
‘A Deputy Speaker is not a Speaker, I’m an MP’ – Joe Wise
Adwoa Safo impersonation: Findings from our preliminary investigations disturbing – Minority
TOP STORIES