How Australia was born 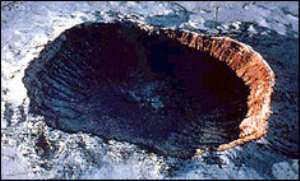 SCIENTISTS believe they have finally solved one of Earth's greatest mysteries: what caused the great extinction of life hundreds of millions of years ago.

The answer was revealed yesterday when an American team announced it had discovered the world's biggest meteor crater almost two kilometres under the ice in Antarctica.

They say a meteor almost 50 kilometres wide caused a 500-kilometre-wide crater deep under the Wilkes Land region of Antarctica, directly south of Australia.

The massive explosion from the impact probably created the continent of Australia, forcing it to break away from the existing land mass.

The incredible discovery caused huge excitement among Australian scientists last night. It could be the missing link in the geological formation of the continents. It would also answer why life on Earth was almost completely wiped out hundreds of millions of years ago.

The meteor the size of Sydney struck 250 million years ago and must have been the biggest explosion ever seen on the planet, far bigger than the 10-kilometre-wide meteor which hit east of Mexico 65 million years ago, wiping out the dinosaurs.

Ohio State University scientists who found the crater said the massive Antarctic crater could explain the global extinction in the Permian-Triassic period when all animal life on Earth died out, clearing the way for the dinosaurs.

The massive impact probably broke up the ancient continent of Gondwanaland, pushing Australia out on its long drift north to its current position. The landmass that became India shot off first, while Africa and South America broke off later.

"This Wilkes Land impact is much bigger than the impact that killed the dinosaurs, and probably would have caused catastrophic damage at the time," said Ralph von Frese, professor of geological sciences at Ohio State University.

They reported their preliminary results yesterday to the American Geophysical Union joint assembly meeting at Baltimore.

The scientists used gravity fluctuations measured by satellites to peer beneath Antarctica's icy surface, and found a 321-kilometre-wide plug of mantle material - a "mascon" in geological parlance - that had risen up into the Earth's crust.

Mascons are the planetary equivalent of a bump on the head. They form where large objects slam into a planet's surface. When the scientists overlaid their gravity image with airborne radar images of the ground beneath the ice, they found the mascon perfectly centred inside a circular ridge 482 kilometres wide.

"Based on what we know about the geologic history of the region, this Wilkes Land mascon formed recently by geologic standards - probably about 250 million years ago," Professor von Frese said.

Professor Michael Archer, dean of the Faculty of Science at University of NSW, said the crater could prove to be the missing link science has been waiting for.

"A meteor that size would have punctured right through the crust of the Earth and caused enormous damage to the planet," he said.

In that period 95 per cent of life on Earth was destroyed, he said.

"It's possible this is the missing key to what caused it."