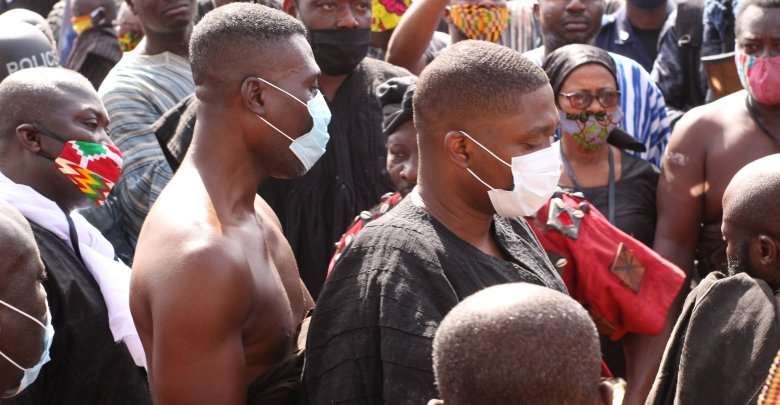 The Akropong Circuit Court has fined four Kingmakers a total of Ghc48,576 for flouting the ban on public gathering and social distancing protocols.

The accused persons pleaded guilty.
Lawyer Joseph Adakpaksa for the accused Persons pleaded for mitigation of sentence considering that only Eleven kingmakers were performing customary rites to install a chief but overwhelmed by presents of Onlookers, and the fact that the accused are old men.

The Court Presided over by Her Honour Harriet Nsembo, therefore, applied the minimum sentence fining each of the accused persons 1,012 penalty units which translates to Ghc12,144 in default serves a 4-year jail sentence.

The accused Kingmakers were arrested Friday, May 2, 2020, for enstooling a Paramount Chief-Oseedeayo Kwasi Akuffo II.

Meanwhile, Akuapem North Municipal Security Council (MUSEC) has prescribed to Chiefs and Kingmakers in Akropong -Akuapem in the Eastern Region to hold on with all public traditional events that are likely to pull a crowd .

The Council has also directed that Nananom strictly adhere to social distancing and gathering protocols if the event is being done in private.

Akuapem North Municipality has recorded three (3) confirmed cases of coronavirus out of the total 87 recorded in the region as of May 2, 2020.

According to the Municipal Chief Executive for Akuapem North, Dennis Aboagye,” with this experience, any other activities that Nananom wants to perform, of course, the traditional chiefdom they are our partners and key stakeholders. So if there are additional activities they are going to perform, we need to have a conversation with them”

He continued that “If it is one that will be done in Privacy then, of course, there is no problem but the one that is likely to pull the sort of crowd we saw, then we will have a conversation with Nananom as much as possible if they could or they should actually hold on with such public event that could draw so much crowd and put all of us our lives at risk.”