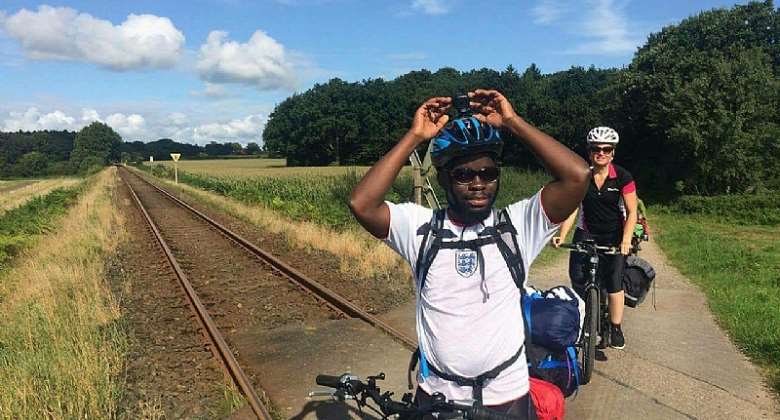 Migration remains and will continue to be a historic human phenomenon that cannot be stopped but can be effectively managed to transmit gains of development to both the migrant and host countries.

There has always been a wave of refugees mostly from Africa trying to enter Europe illegally. Many of these in the last couple of years have been held up at the "jungle" in Calais-France.

In a bid to promote safe migration for Africans, Kwame Oti, a Ghanaian studying War and Conflict Journalism at Swansea university has cycled from Denmark to Swansea.

During his 888.5 miles trip, he passed through Germany, Nertherlands, Belgium, and most importantly, Calais in France.

At Calais, he went to see at first hand the conditions of refugees trying to enter Europe.

Calais is a ferry port in northern France. It housed a refugee camp known as the Calais Jungle, in use from January 2015 to October 2016.

The camp gained global attention during the peak of the European migrant crisis in 2015 when the population of the camp rapidly grew and French authorities began carrying out eviction.

"The people of Calais were unhappy with the surge in migrants and its problems so the "Calais jungle" was closed down some time last year, but these migrants mostly from Africa are still stuck there." Oti said in an interview with modernghana.com

"The world sort of forgot about it. My journey was in a part to go back to Calais to find out what the conditions of the forgotten migrants are." he added.

To his surprise, there were about 200 migrants still in Calais living under deplorable conditions and only manage to survive on the benevolence of a few red cross officials who provide them with lunch.

In the evening they sleep in the cold in the forest.

"They spend their days attempting to enter the UK through the English-French tunnel or hitching a ride on trucks but many of them are unsuccesful," he noted.

Migrants were mostly from Eritrea, Somalia and Ethiopia.

He spent 19 days on the journey with two other friends: Sophia Jessen and Stefan Weichart.

He readily admits that the trip wasn't all rosy as they had to endure rains, cold and storm but his mission to advocate for safe migration processes would not stop him.

"Two of the people I spoke to spent thousands of dollars to get to France with the hope of entering Europe to work and recoup the money. But they stuck are in Calais now."

Kwame Oti is not against migration, he just wants people to migrate properly because living in a forest in France is not the best way to migrate.

"On all fronts, the story is not good, it is simply not worth it. It's a risk that I will caution people against. Don't do it" he advised.

He is the first African to have embarked on this kind of journey using a bicycle within the stipulated time.

Recently, the CNN also reported on a Ghanaian who took a 4, 900-mile road trip from Paris to Accra.

Kwame Oti is a Ghanaian award winning journalist with about 10 years experience working across the African continent. In 2016, he left Ghana to pursue further studies in Europe. His work focuses on Development, Politics and Tourism.