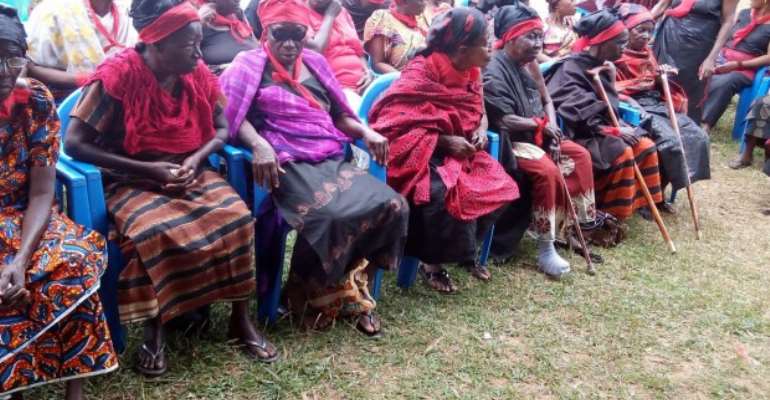 Some members of Mmerewa Resu during the press conference

The conspicuous closeness of controversial politician, Akua Donkor of the Ghana Freedom Party (GFP) to the presidency, has apparently landed President John Dramani Mahama in trouble.

Some old ladies in Kumasi, who go under the name 'Mmerewa Resu,' (to wit: 'Old ladies are wailing'), have launched a scathing attack on President John Mahama for being overly selective.

The old ladies, numbering about 100, who were dressed in red and black cloth to display their fury and grief, lambasted President Mahama for caring only for Akua Donkor and leaving the rest of the oldies to wallow in poverty.

Maame Serwah, spokesperson for the group, said the president had been using state resources to send Akua Donkor on high level international trips at a time majority of Ghanaians are reeling under abject poverty.

Speaking at a press conference on Wednesday morning, she charged President Mahama to concentrate on fixing the ailing economy to improve the lives of the people 'and stop pampering Akua Donkor.'

Maame Serwah said the NDC administration had collapsed the National Health Insurance Scheme (NHIS), making it extremely difficult for the Mmerewa Resu members, whose ages range from 60 to 90 years, to access healthcare.

The spokesperson noted that their children who had graduated from the universities and polytechnics – who ideally, should have been taking care of their mothers now – still remained jobless because of the economic mess created by Mahama's National Democratic Congress (NDC) administration.

Maame Serwah said the protracted power crisis (dumsor) is also making life unbearable for the people, as businesses have been collapsing, 'but strangely, the NDC administration, seems not to have any solution to it.'

Naked Demo
The oldies have therefore given President Mahama a one-month ultimatum to resolve the aforementioned problems else, 'We the old ladies shall embark on a naked demonstration at the Flagstaff House.'

Maame Serwah also urged President Mahama to sack Stan Dogbe, whom she referred to as 'very arrogant,' from the presidency, saying his inactions were rapidly denting the image of the president.

On her part, Atwima Mansah, a member of the group, said old ladies in the country are very hungry due to the poor economic situation, claiming, 'Our children have become burdens on us after completing school.'