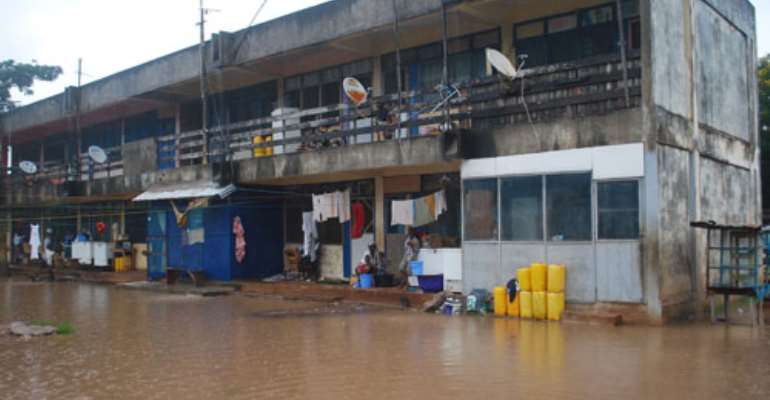 The consequences of the recent flood and fire which brought Accra to its knees are too fresh to demand a rehash. It is worrying though that in spite of the harsh consequences exacted on us as Ghanaians in general and residents of Accra in particular, nothing is happening to calm the nerves of agitated victims as more rains are forecast.

Accra residents do not have cause to be comfortable that there are visible efforts towards obviating an immediate recurrence of the nightmare they suffered. The fact that we are in the early days of the rainy season itself adds to the apprehension. Not even an unconvincing promise of a major construction of drainages is forthcoming from government.

Perhaps those at the helm have learnt their lessons about making untenable promises, especially regarding storm drainage construction in Accra.

The realities of the times are unnerving: the unusual movement of clouds and their form are enough to have residents of areas which suffered the most during the havoc to start moving their mattresses and other belongings to safe grounds.

To be internally displaced by floods speaks of poor planning and the fact that lessons have not been learnt from past disasters by government in particular and the residents in general. The former has a penchant for not fulfilling its side of the social contract and the latter for their irresponsible attitude towards the environment.

For those with hazy knowledge about the role of certain state institutions, the Wednesday flood offered an opportunity to witness this first-hand.

Certain institutions were stretched to their seams on the night of the disaster as they dealt with an unusual calamity.

The sight of fireballs dropping on nearby houses like cluster bombs from an enemy aircraft making sorties was enough to send people with no firefighting skills running for cover, which was exactly what happened that night.

Thank God Chief Fire Officer Gaisie took control of the operations as he dashed to the fire scene. It was an intervention which stretched his men to their limits and gave a relieving assurance to scared residents that they had not been left to their fate, even in the face of a raging fire which defied the extinguishing effect of water.

We hear he was ordered back from the airport where he was due to fly out on an official duty so he could handle the life-threatening occurrence.

Although many lost their lives in the filling station inferno, the toll could have been higher, but for the professional response.

It is incredible that Accra can no longer stand a four-hour torrential rain. No longer are rains, especially at night, signs of good sleep because of the possibility of fire and floods.

We demand effective response from the government through effective application of the bylaws, construction of storm drains and the provision of adequate resources to the Ghana National Fire Service (GNFS), the police and the National Disaster Management Organisation (NADMO) so they too can play their roles should the disasters occur.

Perfidious Asiedu Nketiah and Ofosu Ampofo are imposters in ...
48 minutes ago