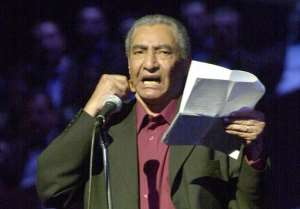 Abnudi, who underwent brain surgery at a Cairo hospital just days ago, rose to prominence in the 1960s for his poems, some performed by legendary Arab singer Abdel Halim Hafez.

In a career spanning four decades, Abnudi, known for his leftist views, published several volumes of medieval poems on Arab hero Abu Zeid al-Hilali and his tribe that travelled through the Middle East and North Africa.

"Egypt and the Arab world have lost a great poet... his contributions to poetry will remain a national and Arab symbol," Sisi's office said.

While Mubarak was forced to quit after a popular uprising in early 2011, Morsi was ousted by Sisi in July 2013 following mass street protests against his single year of divisive rule.

Abnudi's wife, Nehal Kamal, said her husband would be buried in the canal city of Ismailiya later on Tuesday, where he moved years ago.