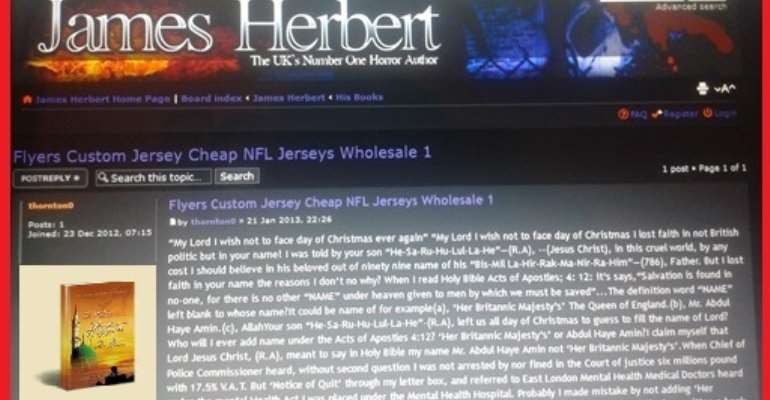 Who has acknowledged and or selected bilingual author Abdul Haye Amin articles known as “My Lord I wish not to face day of Christmas ever again” [http://Blogs.FanBox.com/MyLordIwishnottofacedayofChristmasever]– (enclosed pictures of articles featured in his websites).

The well-known author who published many novelist books turned into films and more than 54 million books worldwide sold his book and 34 states language translated his novel.

I truly lost correct states language under what language myself today going to write since heard of unfortunate news? May my Lord bless his soul and members of his close families, friends, colleagues, authors, publisher, and neighbour those who most dear and nearest one in life.

It remain myself Holy Bible Quran Sura Yasin or history of Prophet Noah at the most critical time in a society only one who believed the Prophet Noah and almighty God, the believer the young lady was alive rest of them was demolished by natural disaster as 2004 Tsunami disaster in Japan seen in reality .

My Lord out of 54 million fans the author James Herbert couldn't be mistaken to select and or to acknowledge my articles in his own websites?

Today I am confused under what category James Herbert going to be place in the day of Judgement? Out of 54 million readers author James Herbert seen to be fall in love with the articles unfortunately he was not given extra extended visa to live in this fantasy world you have taken him silently from us all. My Lord you said one hundred year is only a day according to Biblical language author James Herbert was only 69 year old less than a day old?

I am sure he was not suffering Mental Health Illness or Psychiatry Disorder prescribed tablet neither 'Seroxat' nor 'Zyprexa' to place such articles in his own websites. To guide those who known blinds in this world but to read the articles alone he who has chosen dearly for his followers to follow the true path in his or her life! Should they believe in the name of Church of God?

Myself today speechless and beyond knowledge shocked who am I to be proud of myself today? Everyone is seem to be leaving alone myself in this world to do what in my lonely life?

His beloved friends, fans, colleagues and families may not accept as James Herbert favourite articles “My Lord I wish not to face day of Christmas ever again”

My Lord indeed I was not aware of such highly known author by almost more than 54 million peoples worldwide to dedicate my articles “My Lord I wish not to face day of Christmas ever again” to his beloved fans, friends, families, and to the rest of the universes in absences of their beloved friends and fans.

Thanks my Lord he was died in his bed alone instead of hand of medical neither Intensive Care Unit nor Nero-Disability unit hospital bed where many peoples dies under critical condition. My last word may my God bless the man soul who has respected your followers articles “My Lord I wish not to face day of Christmas ever again” until day of Judgement.

Those fans who are alive and well glow spiritual bright lights through the gate of digital internet everyone homes and have spare times to read my personal articles as James Herbert who left behind the symbol of token of not his or her but almighty God love to share the glory of almighty many decade and years to come!

[Inna-Lilla-He-O-Inna-He-La-He-Ra-Je-Own] Arabic sentences or verses means day of Judgement we shall met once again.

Remember first man on earth was Prophet Adam created by God and second was “PEN” made to writes sincere writers inks never dry in his or her life but it remain as symbol of love in this world for nor writers ever dies but live rest of entire journey of this world those who understand the Biblical words and scripture as written in Arabic sentences [Inna-Lilla-He-O-Inna-He-La-He-Ra-Je-Own]. Author Abdul Haye Amin trust James Herbert name shall glow as morning star and far as eyes could ever see in reality? My sympathy to those who knew author James Herbert and fans may almighty Lord blesses us all.