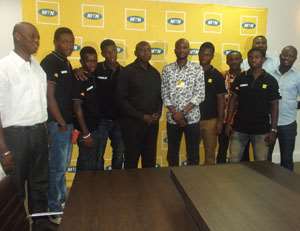 Today, the plush MTN Soccer Academy House will no doubt be the preferred place for a perfect blend of soccer, fun, entertainment and hob-knobbing with the crÃ¨me de la crÃ¨me of diverse fields of endeavours, as the MTN Soccer Academy 6 Skuulz Challenge finally puts the lid on this year's Soccer Reality Show with the crowning of this season's champion.

The Grand Finale will obviously be the defining moment that will eventually bring an end to the suspense-filled days of the Show as the declaration of the Ultimate Winner is finally made.

The quest for the ultimate prize which officially began with the induction of fourteen (14) team mates from some of the country's second cycle and tertiary institutions into the Soccer Academy House, have seen the team mates go through seventy-seven (77) days of rigorous soccer training and coaching under the tutelage of one of Ghana's most respected coaches, Herbert Addo.

The five finalists will now vie for the coveted trophy and prize package comprising two Hyundai i10 saloon cars for player and school, educational scholarship and a two-week training at Edukick.

Patrons of the Show and the general public can definitely expect an unforgettable night in a rich display of authentic Ghanaian music and dance from some of the nation's finest musicians including 4Ã—4, Asem, Chemphe and Kaakie. There will also be splendid cultural performances to add to the pomp and pageantry that has always characterized the finals.

The Grand Finale will be telecast live on Metro TV, the Show's exclusive TV Partners.

Meanwhile, the five finalists yesterday paid a courtesy call on the head offices of MTN.

Noel Ghansah, who spoke on behalf of the Chief Marketing Officer revealed that his outfit's focus is growing the young ones to have a future for themselves and charged the last five contestants to continue to believe in the values of the MTN can-do spirit.

The MTN Soccer Academy 6 Skuulz Challenge is an innovation of Optimum Media Prime, a member of the Global Village Group and proudly sponsored by MTN.