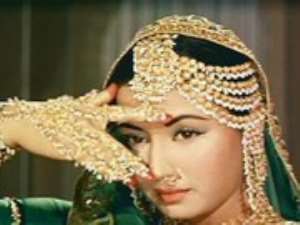 
Yes, Hrithik Roshan is and Meena Kumari was a polydectyl. It means a person having more than normal number of fingers and thumbs in hands or feet or both. There is nothing abnormal/unusual (unless you feel so) about it except it occurs in rare few humans. One may feel odd but that's the way it is.

Hrithik has two thumbs on his right hand. The additional thumb is a small extension which curves inwards towards his main thumb. Incidentally he also stammers and was diagnosed with sclerosis. He says he always felt abnormal due to these but he gradually overcame his psychological barrier.

Whatever it may be, six fingers seem to be lucky. These people are highly talented and achieve great success in life. What say you?

ALIVE:
Kamani Hubbard (one year old), California boy born with a rare case of polydactyly with both 12 fully functioning fingers and 12 toes.

Van Solomon Cornish born January 10 2009 in Ajax, Ontario, Canada to Lisa and Don Cornish of Saskatoon has two thumbs on his right hand.

Sidney George 'Sid' Wilson (32), American musician, turntablist of Slipknot. He was born with an extra digit on his hands and feet. They were dead, however, and were removed shortly after birth.

Hrithik Roshan (36), Hindi movies actor was born with a supernumerary thumb on his right hand.

Jimmy Cliff (James Chambers, 62), is a Jamaican Reggae artist, born with ulnar polydactyly on both hands (removed shortly after birth).

Garfield Sobers (73), West Indian cricketer, had an extra finger on each hand which he removed himself during childhood "with the aid of catgut and a sharp knife".

Heramb Ashok Kumthekar (24), marketing student from Pune was born with 12 fingers and 14 toes.

Franklin D Roosevelt, US President, featured on Monaco philately stamp in 1947 had five fingers and a thumb.

Anne Boleyn was rumoured to have six fingers on left hand.

Volcatius Sedigitus (c. 100 BC), Roman era poet, he got his cognomen because he was born with six fingers on each hand.

Fiction(al) polydactyls:
Alonzo the Armless, a circus performer from the American silent horror film The Unknown (1927).

Count Tyrone Rugen murderous henchman of Prince Humperdink in William Goldman's (78) novel The Princess Bride (1987) and in the Rob Reiner directed film based on that book. Rugen killed the father of Íñigo Montoya.

Dr. Hannibal Lecter genius cannibalistic psychiatrist and serial killer in series of Thomas Harris' (69) novels, including The Silence Of The Lambs (1988).

Connie Chan Po-chu (63), Chinese singer/actor, who acted in The Six-Fingered Lord Of The Lute (1965) that had a six-fingered revenge guy.

Gattaca (1997), science fiction movie had a fictional twelve fingered pianist, who played a modified version of a Schubert impromptu.

the new FOX series Fringe features a six-fingered hand-print both on its marketing posters and on bumpers before the commercials.

An ad for Verizon broadband found in October 2005 Wired

Marilyn Manson (Brian Hugh Warner, 41) American singer had portrayed an alien on his Mechanical Animals (1998) album, and on the cover he was shown with a sixth finger on his left hand.

Ushiromiya Kinzo, a wealthy but elderly businessman and black magician in the 07th Expansion's visual novel Umineko no Naku Koro ni (2007), as well as the manga and anime based on the novel.

We’ll Vote Skirt And Blouse, Mark Our Words; We’re The Mover...
7 hours ago