Is there a light 10 billion times brighter than the sun? 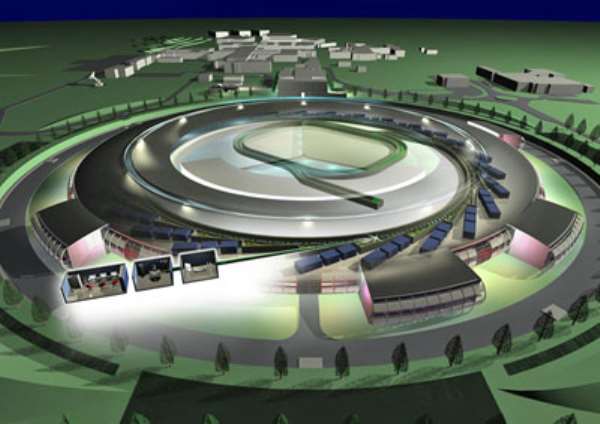 Is there a light 10 billion times brighter than the sun?

By the numbers, the Diamond synchrotron facility in Oxfordshire, England, is a massive undertaking. The particle accelerator cost more than $500 million to build and is housed in a circular building equal in size to five soccer fields. It also produces a highly focused beam of light "10 billion times brighter than the Sun" [source: BBC News]. This incredibly powerful light source and the technological might behind it have many potential scientific applications. But it may surprise you that the Diamond synchrotron could produce its most important discoveries in the field of theology.

Scientists hope to use light from the Diamond synchrotron to "read" ancient texts that have suffered significant damage. Although the discovery of an ancient scroll or manuscript represents a major achievement for archaeologists, anthropologists and other researchers, frequently, these texts are too fragile to open or simply too faded or damaged to read. With the Diamond synchrotron, scientists hope to get around that problem -- this particle accelerator will allow scientists to read some books without even opening them.

The synchrotron emits a powerful X-ray that, when applied to a scroll, allows scientists to produce a 3-D image of the text. With the aid of computer imaging software, scientists then separate the various layers of the image to reconstruct the pages of the book or scroll. In some cases, the text is then readable. The technique has already been successfully applied to texts written with iron gall ink, which scribes began using in the 12th century. Because these parchments contain iron from the ink, applying X-rays results in the formation of an absorption image, distinguishing traces of ink from parchment.

A similar technique may be used on parts of the Dead Sea Scrolls, which researchers haven't opened for fear of damaging them. Once the process of reading texts is improved, it could be used to read a variety of books and manuscripts that have, because of their poor condition, made deciphering their meaning difficult.

Many ancient texts are written on parchment made of dried animal skin. Over time, collagen in the parchment turns into gelatin, causing the parchment and text to deteriorate. Scientists can use the Diamond synchrotron to learn how much of a parchment's collagen has become gelatin and the parchment's level of decay. They also hope to develop new insights into how to preserve manuscripts and to recover those believed to have been lost to the effects of the environment and time.

The Diamond Synchrotron
Also called the Diamond Light Source, the Diamond synchrotron began operating in January 2007. The device produces intensely bright beams of light through the use of a sub-atomic particle accelerator. The process begins with an electron gun that shoots a beam of electrons down a straight tube, called the linac, which accelerates the electrons before sending them into the circular booster synchrotron. In this circular chamber, the electrons accelerate and acquire energy, eventually reaching an energy level of 3 gigaelectronvolts. They then enter a larger circular chamber where, guided by magnets, they accelerate to nearly the speed of light.

A scientist working on the project told BBC News that the Diamond synchrotron is particularly useful because it produces light from all ends of the spectrum, microwave to X-ray [source: BBC News]. And the light that's produced is phenomenally bright -- 10 billion times brighter than the sun and 100 billion times brighter than a standard medical X-ray [source: BBC News].

There are several dozen synchrotrons around the world. Like the Diamond synchrotron, they act as incredibly powerful microscopes, yielding new insights into how particles look and behave on the atomic level. And like other synchrotrons, the Diamond synchrotron will be used for more than reading ancient texts. The synchrotron's remarkable imaging capabilities means that it could be used to study everything from viruses to magnets to environmental science to cancer treatments to new data storage media.

More Technology
Modern Ghana Links
Benefits And Importance Of Digital Marketing For Small Business
How to create a website
How to Convert Outlook PST to Office 365 Account Without Any Loss of Data?
How To Delete An Unsaved Sent Message On Whatsapp
How to Import MBOX into Outlook 2016, 2013, 2010, 2007, 2003
14 free websites to promote your business in Ghana(updated)
7 things to consider while online marketing in Ghana
How to Decide an Easy Way to Migrate OST to Office 365?
Social Media Selling in 4 Easy Steps
Dossiers Quotes Coronavirus
TOP STORIES