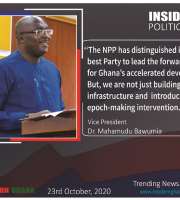 The taking of responsibility is every Ashanti man's lot and he believes that it begins in the ownership of a home where he will be responsible for a group of the clean. Wherever he may be, in whatever circumstance he may be placed, he tries to make his home. He builds a house to accommodate himself and all those under his care. He say: Wo se akyi nnye de a eho ara na wo tafro. This is very near the saying "there is no place like home." For this reason the Ashanti's highest ambition and all his aspiration is directed to building a house and making a home. Pubic opinion is so very bitter against celibacy that the Ashanti's next pressing concern is to get married and have children.

Sterility is considered a most deplorable misfortune. Its

unfortunate victims have to endure contempt and derision. Many build their houses and leave the father 's or maternal uncle's house soon after getting married. As he is of age, he should begin to be self-contained, self-sustained and independent. Wo aso aware a, to wo prete. "if you have reached the state of getting married, you must be able to provide yourself with dishes," is the saying that independence should be followed by responsibility which one must shoulder squarely. And yet he never stands alone in making his mind on these essential projects in life. He usually builds his house on a plot his father assigned to him. It is by the site of or behind the father's.

Marriage by Consent
The Ashanti man takes a lot of things into consideration before getting married. Union by marriage is too important to trivial treatment. The parents of a daughter must hand over the human life in their care to a really responsible custodian. No daughter will accept an offer of marriage from any an without the consent of her parents. "If my parents agree to your proposal, I shall have no objection," she will say. In practice parents choose wives and husbands for their sons and daughters. It is their responsibility to be able to solve the initial problems (with all their implications) in a lasting tie like marriage. Resulting from war efforts, the woman is the custodian of the children of the marriage and they are, in essence, hers. they claim clanship through their mother and to a larger extent, inheritance, especially since the land, the Ashanti's precious property, is known to belong to the woman and not the man But then comes the adage that if a woman weaves a shield, she stores it in a man's room. in other words what every woman acquires must belong to a man.. Marriage therefore plays an important part in the communal life of the Ashanti Nation (Asanteman), Many Ashanti wives have become known to their husbands for the first time in their first meeting as man and wife. And yet divorce is almost unknown in a true Ashanti community. Parents on both side have a duty to keep the marriage going or else break the marriage with the resultant break or a life-long tie not only between the couple but the two families. All marital leakage likely to flood and demolish the structure of a community are quickly blocked. " aware annya akyigyin a, egu." Meaning - It is the marriage that has no backing that breaks. All marriages, once contracted, should be self supporting.

Communal Life
The average Ashanti is polygamous. Many men strive to marry more than one woman to show their readiness to support a large family and their generosity. Ashanti communities are basically communal and the wealth of one should benefit all. And many men think the best way perhaps, of sharing wealth is taking two or more wives.

Despite difficulties brought about by the custom of inheritance by people other than one's own children, the average Ashanti feels a clear duty towards his wives and children. It is the father's responsibility to train his children to be truly men of valour and honesty.