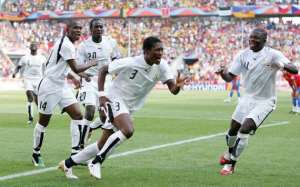 Accra Great Olympics captain, Gladson Awako has expressed his belief that the return of Sulley Muntari and Asamoah Gyan will arouse interest in the Ghana Premier League.

Sulley Muntari has been heavily linked with a swan-song move to Hearts of Oak in the ongoing Ghana Premier League whiles Asamoah Gyan, who is now a free agent after leaving Indian Super League side NorthEast United FC, also reiterated that he will end his playing at boyhood club Asante Kotoko.

The two players have been urged by several football advocates including Asante Kotoko coach Maxwell Konadu to make the moves.

According to Awako, the excitement of the Ghanaian top-flight championship will bounce back if the duo decide to participate in the league.

“I think this is a plus for us the players and the football association because their return to the local scene will motivate supporters to go to the stadium in their numbers,” the U20 FIFA World Cup winner intimated.

“So if all these great players want to come back I think it’s going to revive the game here,” he deduced.

Muntari has been a free agent since leaving Spanish Segunda Division side Albacete in 2019.

He has also played for Udinese, Pescara in Italy, Spanish side Deportivo La Coruna, Ittihad in Saudi Arabia and Portsmouth in England where he won the FA Cup in 2008.