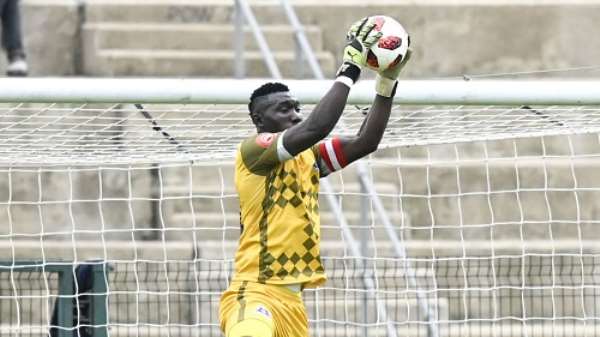 Ghana goalkeeper, Richard Ofori says he is stunned with th performance of Marisburg United but believes his side have a good chance to finish in the top three of the South African Premier League.

Maritzburg nearly suffered relegation last season but got a lifeline to remain in the topflight through playoffs but they have come good this campaign and are currently fifth on the league log with 39 points from 24 games.

According to the former Wa All Stars goalkeeper, they all came into this campaign with good mentality after struggling last year and it had worked well for them.

"This season has been amazing. Coming from playoffs last season we all came with a positive mentality to win and do our best for the team and the city," Ofori told kickoff.

"We are doing our job with full commitment and thanks to the fans that give us the best atmosphere to play in."

Ofori is also the only shot-stopper who has been nominated for the Kickoff ABSA Premier League Player of the Year award and he is pleased with it as his stock continues to rise.

"As a keeper, I feel happy, honoured and excited to be nominated as one of the footballers of the year," he added.

"I would like to thank God for the blessings. It's not often to see a keeper nominated in these awards so the mere fact that I am part of it this year means my efforts and hard work are noticed there.

"But all is made possible through God and most importantly my entire team as a whole who gave me the best and most comfortable environment to work in."

Ofori has kept 10 clean sheets and conceded just fifteen goals in the 23 league games he has been in post this season for the team of choice.

Despite extending his contract with Maritzburg United by one more year, he still remains a summer transfer target of Mamelodi Sundowns, Orlando Pirates as well as Belgian side Gent.