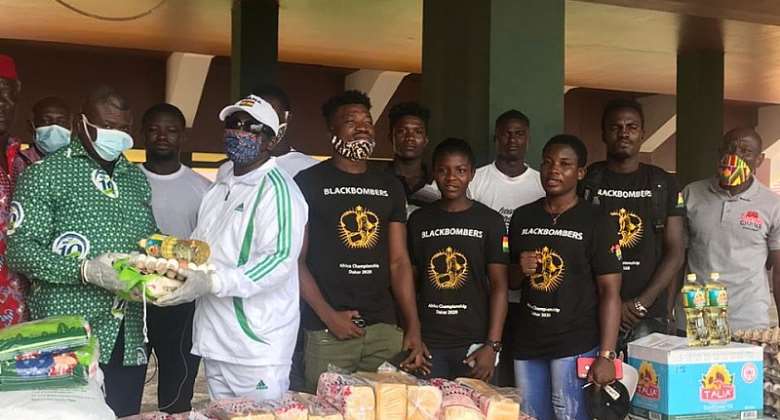 Members of the Black Bombers, the national boxing team and the Pro Fighting Factory Gym in Accra have shown appreciation to the massive donation they had from Swiss-based Ghanaian WBC Muay Thai champion, Lawrence Nii Nyanyo Nmai.

President of the Ghana Boxing Federation (GBF), George Lamptey who received the items from Nii Adote Dzata 1, ex-president of Ghana Kickboxing Association presented them to the national boxers, while Isaac Doku, coach of the Pro Fighting Factory also gave to his athletes.

Wahid Omar who received the donation on behalf of the boxers said they were happy and wished Nmai all the best in his endeavours.

Olympic Games 2020 bound Samuel Takyi noted that he has learnt a lot from the presentation, and thanked the donor, wishing him God’s guidance and blessings.

Female boxer, Faruza Osman who was also amazed at the presentation said she was happy that someone has taught of helping them after the lockdown.

Jonathan Euro, the 2018 SWAG Kickboxer of the year said they have been surprised and inspired by the presentation, and promise to rededicate themselves to the club and sport. He promised that they will train harder for future tournaments, as the COVID-19 has hampered their opportunities in the year.

Isaac Commey, ASC African MMA champion expressed on his Facebook wall “U won’t understand God he does everything his own time. I love what you did for us the fighters. Mr Lawrence Nyanyo Nmai May God guide and bless you and generation”.

He advised sportsmen and women not to lose hope but keep on training as they observe the social distancing. He urged them to focus on the future as there is hope in the future.

Jerry Quansah, a new kickboxer also hailed Nmai and prayed for God’s blessing on him.

Michael Amanor, Team Manager of the Pro Fighting Factory said they were touched by the fact that no one thought about less financed sports men and women who contribute a lot to the socio-economic development and promotion of the nation at international level.

He said if footballers are playing their part, boxers and kickboxers also have to support and he commended the President of Pro Fighting Factory who accepted to share love to his colleagues.