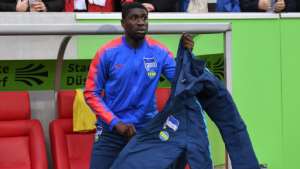 Anderlecht versatile defender, Derrick Luckassen is finally ready to represent Ghana’s Black Stars as he has finally written to the Ghana FA to commence a nationality switch for him according to SportsworldGhana.com.

Born in Amsterdam to Ghanaian parents, the 25-year old defender has represented the Netherlands at the various youth national team levels but has opted to play for his motherland at the senior national level.

The PSV asset has officially written to country’s football governing body to commence documentation to declare him eligible to play for the four-time African champions.

The player who previously has held talks with former Black Stars coach Kwasi Appiah recently was visited by current Ghana Coach CK Akonnor when he travelled to Belgium to monitor Ghanaian players as part of his Europe tour to unearth new talents for the African powerhouse.

Luckassen joined the Belgian giants on loan from his parent club PSV Eindhoven in 2019 the summer transfer and has since strongly established himself as a pillar in defense for Vincent Kompany’s side.

The Lanky defender currently plays as a centre-back at Anderlecht can also play both the right-back and left-back roles as a result of his versatility on the pitch.