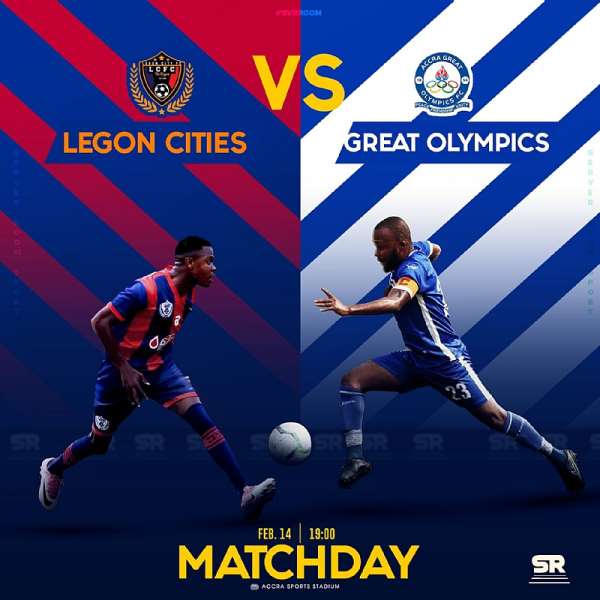 Two of the capital-based clubs, Legon Cities FC and Great Olympics will lock horns in a crucial encounter at the Accra Sports Stadium later tonight in a Match Week 10 fixture of the Ghana Premier League.

The rebranded Wa All Stars club go up against a reinstated Olympics side which is having its struggles in the ongoing 2019/2020 league season as it continues to deal with inconsistent performances.

Looking back at the start of the League, both clubs would think this is not how they envisaged their respective campaigns to be at this point in the season.

On 10 points each after playing 9 matches, they are just a point away from the relegation zone and could drop into the red if they fail to get positive results in their upcoming meeting.

Previewing the clash, Legon Cities sits 14th on the standings of the division with a record of two wins, four draws, and 3 defeats. A poor run which has seen the side scoring just 6 goals and conceding 9 in the process.

One problem they would like to solve tonight when they take on Great Olympics is to be able to create chances and show potency in front of goal.

For their opponent, the Dade Boys despite their worries go into the fixture with a lot of confidence. Maybe they are not winning, but having scored 10 goals in 9 matches means they are capable of finding the back of the net in every outing.

They will hope veterans Gladson Awako and Emmanuel Clottey will come to the party today in order to help earn the needed win. Meanwhile, they have reason to worry after suffering 5 defeats after 9 matches.

In this preview, it is obvious these are two clubs struggling and in need of a revival and consistent displays to try and climb up the table or risk fighting the relegation battle in no time.

Legon Cities FC will play as the home team today at the Accra Sports Stadium with the match set to kick off at 19:00GMT.

As part of a valentine’s day treat, the Royals have reached an agreement with Afrobeat and Afropop songstress Wendy Shay to have her perform at halftime to offer additional entertainment to spectators.

In addition to that, chocolates will be shared as a way of showing love to everyone that will troop to the stadium.