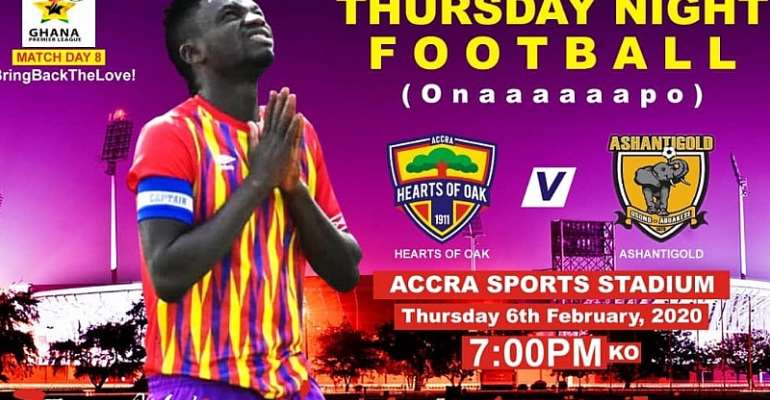 Ghana Premier League giants Hearts of Oak has announced the ticket prices for its meeting with title contenders Obuasi Ashanti Gold on Thursday, February 6, 2020, at the Accra Sports Stadium.

The two heavyweights of Ghana football are tipped as one of the few teams that can go all the way to lift the enviable title at the end of the season. However, results after 7 matches into the campaign have not been that rosy for either side.

For the Phobians, they are 8th of the League standings after winning 3 matches, drawing a game, and losing 3 matches as well. It is a poor record that has largely been caused by their inconsistencies since the season started.

Ashanti Gold, on the other hand, has 13 points and currently sits 5th on the standings of the top-flight division. They have managed to win 4 matches, drawn 1, and has suffered 2 defeats in the process.

Now set to come up against each other, it is expected that they will put up the needed fight to ensure they amass all 3 points at the end of the 90 minutes.

Ahead of the clash in midweek, Hearts of Oak has put out the prices of tickets to keep supporters who will be trooping to the Accra Sports Stadium to watch the match informed.

Find the rates for the Popular stand, Center Line, Lower VIP, Upper VIP, and VVIP below: