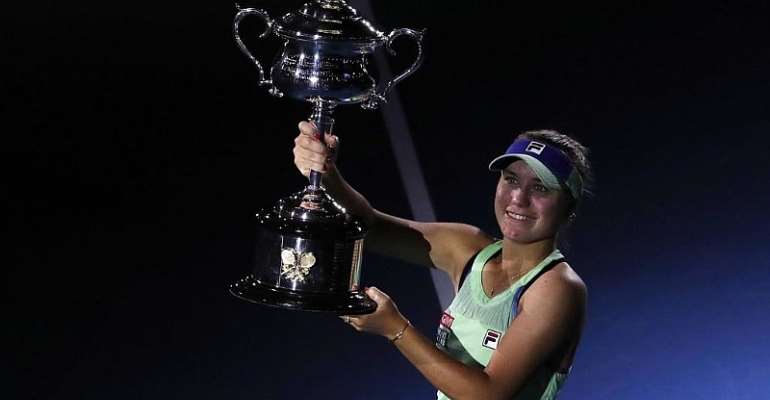 Sofia Kenin shrugged off the loss of her first set in a Grand Slam final on Saturday to sweep past Garbine Muguruza to claim the Australian Open.

The 21-year-old American beat the Spaniard 4-6, 6-2, 6-2 to lift the Daphne Akhurst Memorial Trophy and collect a winners cheque for 2.52 million euros.

"My dream officially came true, I can't describe this feeling," said Kenin. "It's amazing, dreams come true. If you have dreams, go for it, it's going to come true."

Rated 15th in the WTA world rankings at the start of the season's first Grand Slam tournament, Kenin will rise to seventh and usurp Serena Williams as the top female tennis player in the United States.

Muguruza, a former world number one, entered the final as slight favourite having hoisted the 2016 French Open title and the 2017 Wimbledon crown.

Resurgence
Even though she has dropped to outside the top 30, the 26-year-old displayed the brio of yore as she dispatched higher ranked operators - inlcuding the fourth seed Simona Halep - in her surge to the final.

But after taking the first set in 52 minutes, her serve evaporated. Kenin pounced on the frailties and levelled the match within 32 minutes.

The decider effectively hinged on the fifth game.
Muguruza held three consecutive break points but Kenin reeled off two backhand down the line winners and then a forehand winner to gain parity at deuce.

She then hit an ace and took a 3-2 lead after a forehand passing shot winner.

Escape
A ruffled Muguruza lost her next service game to give Kenin a 4-2 advantage. That quickly became 5-2.

And Muguruza served three double faults in the final game - including one on championship point - to hand Kenin the title after two hours of combat on the Rod Laver Arena.

"The past two weeks have been the best of my life," added Kenin, who at 21 years and 80 days, becomes the youngest Australian Open champion since Maria Sharapovalifted the title in 2008 at the age of 20.

Bishop Dag apologises to Otumfuo over 'offensive' sermon
32 minutes ago

There's power in a father's encouragement – Pastor Otabil
32 minutes ago